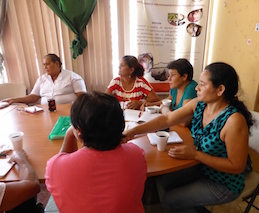 Taken from Nicaragua News (29 September 2015) under the heading ‘Continuing drought is punctuated by heavy rains and flooding’.

On September 28, government spokeswoman Rosario Murillo reported that 284 families had been affected by the heavy rains that fell over the weekend in the Departments of Madriz, Nueva Segovia, Matagalpa, and Managua. She said that in Managua, four houses were seriously damaged, six others were at risk of collapse and 280 others had been affected in some ways. On Sept. 25, three little girls drowned in a river that overflowed its banks and carried away the pickup truck in which they were riding. On Sept. 24, two people in Chinandega were killed by lightening during a fierce thunder storm which also caused storm sewers to overflow and houses to flood.

At the same time, concern grew about the regions of the country with insufficient rainfall, especially the area known as the Dry Corridor. Government spokeswoman Rosario Murillo said on Sept. 23 that the government in September had distributed more than 30,000 food packets to homes in the region and on Oct. 5 would begin another month’s distribution. Meanwhile, Minister of Industry and Commerce Orlando Solórzano said that the Ministry was considering importing several tons of corn to avoid scarcity and speculation given the loss of a part of the first harvest. He authorized the importation of onions and carrots to satisfy domestic consumption.

Fr. Uriel Vallejos, director of Caritas Nicaragua, asked the government to declare an emergency in the municipalities of the Dry Corridor. He said, “We’re not asking for it for the whole country because it’s a sector of Nicaragua that is suffering so much in this drought.” He added that the drought is affecting 10,000 families or 60,000 people. Vallejos stated that the food that the government is distributing does not reach everyone and he said that he is preparing a letter to President Daniel Ortega in which he notes that people in the drought zone are losing their harvests and having to sell all their animals in order to survive.

Alvaro Fiallos, president of the National Union of Farmers and Ranchers (UNAG), said that in the humid zone of the country farmers have planted for the second harvest of corn and beans but “where it hasn’t rained they haven’t planted for the second harvest and if it doesn’t rain they can’t plant.” Michael Healy of the Union of Agricultural Producers of Nicaragua (UPANIC) said that this week farmers would be meeting with the government to agree on what measures to take. He said that UPANIC was proposing projects in irrigation, water storage, reforestation and biotechnology. He noted that due to the drought harvests of sugar cane and peanuts, both export crops, were down by 20%.

Martin Mowforth (MM): So, a short interview with the members of the CMO, September (11) 2015 focussing specifically on the immediate effects of the drought which is hitting this zone [The departments of León and Chinandega.]. Can you give me your names first, please?

Marina Serrano (MS): Good day, my name is Marina Serrano Tercero. I am a member of the Council of Women of the West of Nicaragua. We would like to tell you that we thank you; in truth, you have been the first that is, to find out about the situation of the drought that we are going through here in the West.

Well, we sow during two periods in the West: that is the first and the latter. That is to say that the drought has affected us throughout, in all directions. Because with the livestock, without rain there is no pasture, true? It dries and we even have limits with the milk, the curd, which is the staple food. And the corn, the beans, we also can’t harvest, we lose them. We have already lost the first (harvest) and we had the hope that as we went through the latter we might find a bit of a solution. However, we are aggrieved because I think as we continue, we aren’t going to get a second (harvest). So, this is something quite worrying, right? This is what we ask, as much to the government as to fellow citizens, that in some way they are able to help us, right? To be able, at least, to support our children. Because they are the ones most affected, the children. And us, the women, right? Because it is, practically the drought which has left us drinking the dryness, as we say in Nicaragua.

MM: Yes, Can you repeat something, the effect of monoculture, of monocultivation? Can you give me your name first, please?

Maria Jose Urbina (MJU): Good day, my name is Maria Jose Urbina, I am from Leon, and in truth one of the consequences that we are living through nowadays is the drought which we have – its effects are really traumatic; with the large expanses which we have as a result of the growth of monoculture here in León and Chinandega; and the large amount that they are sowing. Why? Because many of the small producers don’t own land to be able to work. So it’s easier to rent the land, or sell. So in this way this has helped monoculture to expand. The same as the peanut – the peanut, in spite of the fact that it is a product, it is a product for export, it has always been one of the biggest monoculture crops that we have had. However, this is also seen to be affected by the change of the drought. And all of these monoculture products have made our soil more exhausted. In León they plough large Tolibañeras [areas?], depending on the weather, because we don’t have, the means of how to [her voice fades] to give proper maintenance to what is our environment and agriculture. One of the biggest problems of the drought is that we cannot produce or sow the first crop; now we are in the period of the next season. And right now we are at that period and we cannot sow because we have the drought; it isn’t raining enough. We’ve not been able to sow and what little rain rain has fallen well we haven’t been able to do anything, for small-scale production of the small producers. Also, one of the biggest problems of monoculture is the drought of water – excuse me – the water, the water table of León and Chinandega, [inaudible] have been seen to be affected. Why? Because to irrigate the sugar cane they use huge irrigation systems which has ramifications for the water table. And this makes our water table dry out; we have dry wells, we don’t have rivers, the rivers are dry. So this is one of the great effects that we experience.

The large producers and businesses are growing, the small and medium-sized producers are disappearing every day because of the lack of natural resources and finance which we don’t have for production.

MM: I thank you, a perfect explanation, many thanks.

A voice that’s not easy to hear well

MM: Can you give me your name please?

Today the current problem is the drought that still affects us. With regard to its growth and value, the value of the shrimp, which is under much stress, is losing worth. I can tell you … [the voice goes and is inaudible.] and its growth falls. And no, it’s profitable, it is more costly. And this is a very hard cost.

Voice of another woman: And the harvest is also falling.

VVS: The harvest falls, it is a result of more risk [a lot of static noise – inaudible voice]. All of the parameters that it should have for us to get a product, but a product which is going to be satisfactory, I can say, for our business that we have …. [inaudible].

MM: Thank you, many thanks for everything.