Clearly the coronavirus pandemic is affecting economic, social and environmental development in Central America. The problem for a website entry that updates a fast-changing situation such as this pandemic is that by the time the entry is made onto the website the data it presents soon becomes out-of-date. So I have tried to limit the significance of the statistical data given here and to paint a background picture to the spread of the virus in each country.

That said, I begin with virus statistics as at 18th April 2020. The data are taken from SICA, the System of Central American Integration at:  https://www.sica.int/coronavirus and are updated each day, so readers can easily check current levels of infection. Also more detailed statistics are given on the Worldometer website at: https://www.worldometers.info/coronavirus/country/panama/ 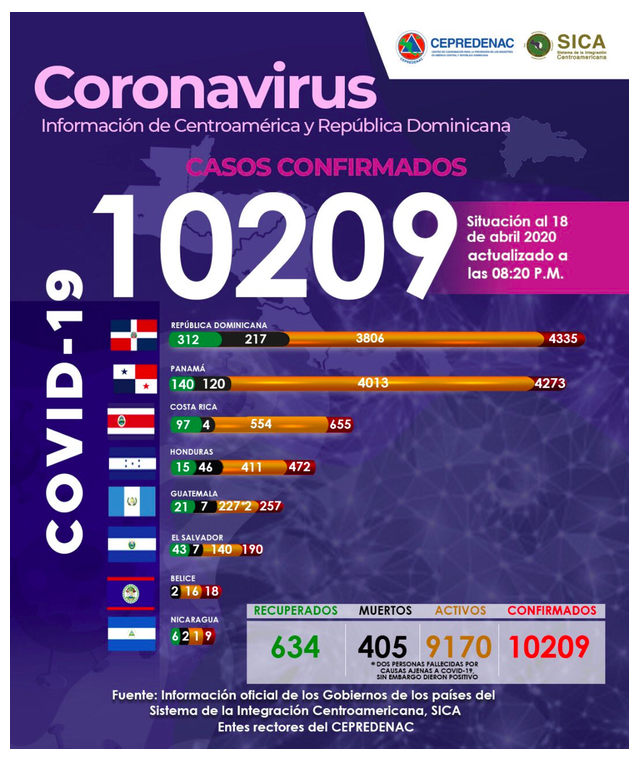 (Note: The Dominican Republic is included in the data because it is a member state of the DR-CAFTA free trade treaty signed in 2006.)

Quite apart from the epidemiological trends and features of the pandemic, various political, economic and social trends have resulted from the spread of the virus. A few of these are briefly mentioned in the remainder of this summary.

Clearly, the worst affected countries are the Dominican Republic and Panamá. In the case of Panamá, the government declared a state of emergency on 10th March. By the 22nd April, the number of new cases in Panamá appears to have subsided somewhat and the number of new deaths per day has reached a plateau. Because of poor compliance with self-isolation measure, in early April Panama took a different approach to combat the spread of the virus: separation of the sexes. Only women are allowed to leave their homes to buy necessities on Monday, Wednesday and Friday. Men in Panama are allowed to venture outside to run errands on Tuesday, Thursday and Saturday. Everyone has to stay home on Sundays.

In Costa Rica a state of emergency was declared on 10th March, especially because people were not following guidelines on social distancing. On 18th March the country closed its borders to all foreigners. Internationally, Costa Rica has attracted attention due to the suggestion made by President Alvarez that the world should develop a Technology Intellectual Property Pool [TIPP] that will accelerate scientific discovery, technology development, proof of safety/efficacy/quality, and broad sharing of the benefits of scientific advancement and its applications in furtherance of the right to health. As proposed by Costa Rica, the formation of TIPP would be coordinated in the first instance by the WHO after which operational implementation might be assigned to other coordinating entities. Such an agreement would bring pressure to bear on the large pharmaceutical companies to share their patents and so is unlikely to be supported by President Trump. It is possible, however, that such an initiative will be instigated through the WHO in the near future despite Trump’s suspension of US payment of dues to the WHO.

The Nicaraguan government has adopted the Swedish approach to the virus – that is, recommendation of social distancing but without a lockdown. For this they have attracted considerable criticism from the opposition who have been spreading all kinds of rumours on social media, not the least of which suggests that President Daniel Ortega is either very ill or dead. The small but voluble, US-supported opposition is essentially claiming that the government is taking a ‘do little‘ approach, and is irresponsible in its disregard for its population. Of course the government counters these arguments, pointing out its high level of testing, the fact that it has the best and most accessible health system in Central America and the lowest number of Covid-19 cases (10 as of Monday 20th April) and deaths (2 as of the same date). In response to the data, the opposition claims governmental manipulation of the figures – i.e., fraudulent reporting. As almost always, the opposition never feels the need to present evidence for its claims.

In El Salvador, the virus appears to have given President Nayib Bukele an opportunity to extend his authoritarian tendencies with enforcement measures being strictly implemented to ensure that people self-isolate. He has given local mayors the power to enforce isolation instructions. A recent report has surfaced of a doctor requesting anonymity for fear of reprisals after being critical of the government’s approach to the virus. The economic toll of the lockdown is reported to be especially harsh in rural areas where many businesses have simply closed making it difficult for many people to get their basic necessities.

Honduras has over 500 cases of infection by the virus and has suffered 46 deaths resulting from it. But it also has the weakest public health system in Latin America. In part this is due to attempts to privatise the system and in part due to a series of corruption scandals involving the embezzling of funds supposedly destined for the health system. Over recent years the public health system has been looted by corrupt politicians and corrupt businessmen, and is in a poor state to cope with the coronavirus pandemic. As this website has reported at various times in previous articles, the Honduran government is run by organised crime and drug traffickers who care nothing of the public health of the Honduran population. San Pedro Sula, the country’s second city, and the Sula valley in which it is located are reported to have an exceptionally high rate of infection which may or may not be associated with the extensive plantations in that area – see below under ‘Plantations’. COFADEH, the most respected and reliable Honduran human rights organisation has reported that around 800 Hondurans have been detained since the regime’s coronavirus military-enforced lockdown began. The exploited poor simply cannot stay at home and obey the order because they live day-to-day and don’t have the economic means.

Worldometer reports over 300 cases of infections and 8 deaths caused by coronavirus as of 22nd April in Guatemala. On 20th April eight public health officials were fired (including two deputy health ministers) for conspiring to defraud state funds that were destined for dealing with the coronavirus pandemic. Human Rights Ombudsman, Jordan Rodas, has formally requested the removal of Health Minister Hugo Monroy from office due to his slow and poor management of the pandemic. As with most of the other Central American countries, Guatemala has a historical shortfall of hospital beds and personal protective equipment for health workers.

Belize has closed most of its ports of entry, although its international airport remained open until the state of emergency was declared. On 1st April the government declared a state of emergency to last for 30 days along with a curfew from 8 pm to 5 am every day. As of 22nd April, there are believed to be 18 cases of infection and to have been two deaths.

Unionised workers on plantations in Latin America have been seeking special measures to protect their health and their incomes while transnational fruit companies seek to ensure continued supplies of tropical fruits to supermarkets in Europe and North America. German supermarkets have committed to sourcing their bananas from companies that commit to paying their plantation workers a living wage.

The following statement by Dr Juan Almendares Bonilla presents the Covid-19 pandemic in a perspective that differs from the usual commentary. Juan Almendares is a Honduran physician, former university rector and formerly director and leading light of both the Movimiento Madre Tierra (Friends of the Earth Honduras) and the Centre for the Prevention of Torture. An interview I conducted with Juan in 2010 appears in the Interviews section of this website.

“Honduras and Guatemala are countries of pandemics: the pandemics of hunger and no access to water, of dengue, corruption, repression, and today of Covid-19. All these pandemics are inter-related. Trying to focus public, private, social and international cooperation actions and resources on one pandemic – COVID-19 – without an integral approach strategy, only deepens the others. That is, there will be more people living with hunger, dengue, lack of water and loss of resources due to corruption and repression.”