By the time this file reaches the reader, the table of data below will already be out of date, but it provides some idea of the relative significance and rates of the Covid-19 effects in each Central American country. The text following the table gives a brief summary of some of the specific problems relating to Central America’s rollout of the vaccination programme and the effects of the pandemic on the economies of the Central American nations. 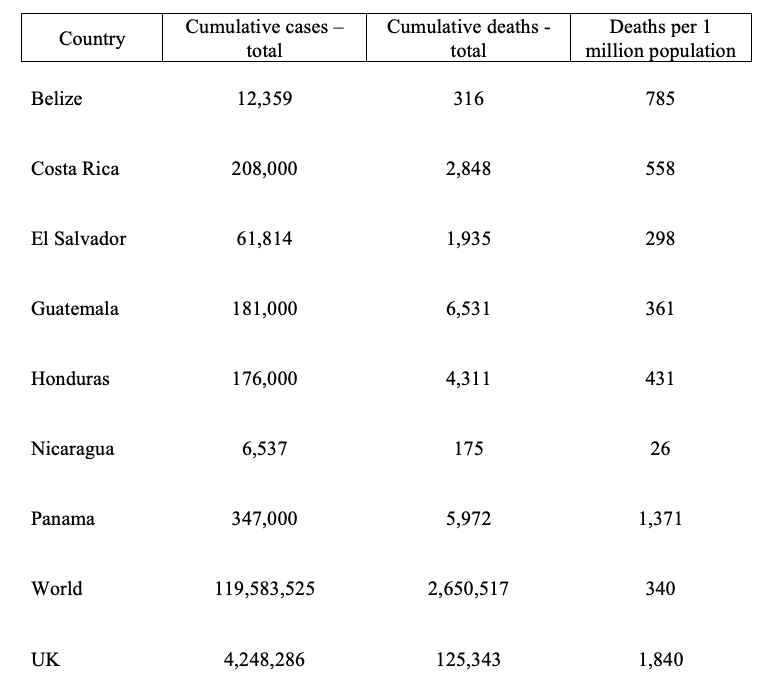 In general the rollout of vaccines in Central America has begun but is around two months behind the UK vaccination programme. On 15 February Honduras was expecting to have received its first batch of 80,000 doses of the AstraZeneca vaccine through the COVAX mechanism, but this was delayed until March due to delays in the multilateral approval of the vaccine.

El Salvador, on the other hand, did receive its first batch of 20,000 AstraZeneca vaccines in mid-February. This batch came from the AstraZeneca company in India and was used to vaccinate health care workers. El Salvador is one of four Latin American countries selected to receive 400,000 vaccine doses through the United Nations COVAX programme by the end of March.

At the beginning of March, India donated 200,000 vaccine doses to Nicaragua. Nicaragua also agreed with Russia to accept a donation of 3,800,000 doses of the Sputnik V vaccine which were due to arrive over the course of a few months from March onwards.

At the end of February Israel donated 5,000 Moderna vaccines to both Honduras and Guatemala to enable them both to begin vaccinating health care workers. It is interesting to note that Israel also trains both of these countries’ military forces and actually keeps some of its own military forces on the ground in these countries. It is also coincidental and interesting to note that the security forces of both countries are among the world’s worst human rights abusers, a characteristic they share with the donor country. It is also interesting to note that both countries recognised Jerusalem as the capital of Israel. Also at the beginning of March, India donated 100,000 Covishield vaccines to Guatemala.

Despite the donations, various articles appeared in national papers and journals bemoaning the slow delivery of vaccines. El Economista for instance noted that the six Spanish-speaking countries of the isthmus all participated in the Covax facility, the internationally coordinated mechanism to provide equitable and accessible access to the vaccines. But by the end of February none of them had received any vaccines through the mechanism due to production problems and to a monopoly of the vaccines by rich countries. It also recorded that these six countries of almost 50 million people were characterised by high levels of poverty and deficient sanitation systems; and yet they had recorded almost 1 million confirmed cases of Covid-19 with over 20,000 deaths.

Despite increases in mining exports and in earnings from the Panama Canal, Panama’s GDP is reported to have fallen by 18 per cent during 2020 largely due to falls in the worst hit sectors of construction, commerce and tourism. Costa Rica’s level of tourism is currently reported to be at only 20 per cent of what would ‘normally’ be expected, and many airlines are still reluctant to re-open their flights to the region.

In mid-March, Belize became the first Caribbean nation to announce that it would welcome vaccinated travellers who would have to provide proof that they had been vaccinated at least two weeks before entering the country rather than providing a negative Covid-19 test. Travellers have to download the Belize Health App and add the required information within 72 hours before arrival in the country