There are two mechanisms for raising the funding required by REDD initiatives:

Government funding: This mechanism would be financed mainly from funds derived from the auction of emission allowances in the European Union’s Emissions Trading Scheme and others, as well as developmental assistance funds.

Each rainforest nations would monitor deforestation at the national level against a generally agreed baseline. Payments would be made on the basis of deforestation reductions at country level. Each country would set up its own strategy to invest these funds to continue to receive annual transfers.

Market-based: This mechanism would be financed by allowing companies in Annex 1* countries to offset part of their emission reduction obligations through REDD.

Project owners and developers would validate and certify projects under generally agreed guidelines and approved methodologies. Each project would invest the carbon credit revenues according to local and regional conditions. These results would be inspected periodically by independent auditors at project level.

The following extracts are taken from the ‘Political Position of the International Indigenous Forum on Climate Change after the First Week of Negotiations 6th December, 2010, Cancún Mexico’.

As Indigenous Peoples from all over the world attending COP 16, we are at the front line regarding the direct impacts of climate change, the impacts derived from the implementation of false solutions, and the impacts generated by States which do not recognize or guarantee our rights. Our present and future survival is at risk. However, we continue, in effect, to be excluded as Indigenous Peoples from these discussions and these decision-making processes. We demand respect for our rights as well as our full and effective participation.

We reaffirm that the three main pillars of our political position must be guaranteed and implemented in the final outcome of Cancun, as well as in all the processes, agreements and actions on climate change at the regional, national and international levels:

We recognize that the current negotiating text being negotiated by the Parties contains some references to Indigenous Peoples, and these references must remain in the final agreement in Cancun. However, these references fall short of responding to our demands for the full recognition and implementation of the rights which, after 30 years of struggle, are now recognized in the United Nations Declaration on the Rights of Indigenous Peoples. Our rights must be included in all sections of the agreement coming out of Cancun, inter alia, the Preamble, Shared Vision and REDD sections.

We also continue to reject the carbon market as a false solution to climate change. Our Mother Earth is not a commodity. In particular, we insist that forests serve a variety of functions and are the source of life for Indigenous Peoples around the world, including those in voluntary isolation. For this reason, they cannot be part of any program or scheme based on the carbon market.

The solutions must recognize that Mother Earth is sacred. We urge the State representatives to reflect on and evaluate their relationship with Mother Earth, and to find real and effective solutions that restore the equilibrium and respect between nature and human beings.

We urge the State representatives gathered here to recognize the gravity of the climate crisis. We demand that, especially the industrialized countries, assume their responsibilities for the defense and protection of Mother Earth and commit to take effective, serious and legally-binding actions to reduce emissions of the Greenhouse Gases that are threatening life around the world.

We must speak for the plants, animals and future generations whose voices are not included here. Their survival, like ours, depends on strong, just and real outcomes at the end of this week here in Cancun. 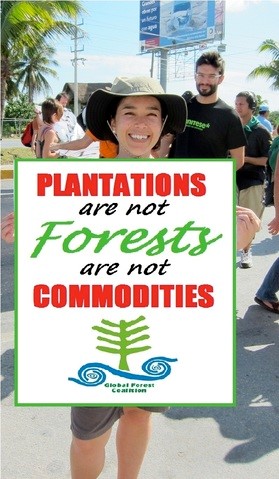 The UN states that the chief aim of its program for Reducing Emissions from Deforestation and Forest Degradation (REDD) is “to make forests more valuable standing than they would be cut down, by creating a financial value for the carbon stored in trees. Once this carbon is assessed and quantified, the final phase of REDD involves developed countries paying developing countries carbon offsets for their standing forests.”[1] On its face, the idea of “reducing emissions from deforestation” is extremely appealing. But the devil, as they say, is in the details. While the major multilateral institutions, including the UN, the World Bank, and many large environmental organizations, support REDD – indeed, accept it as a done deal – a vocal core of forest-dependent communities[2], environmental justice advocates[3], Indigenous organizations[4], and global South social movements[5] see REDD as a Trojan Horse.

REDD will restrict access to forests for livelihoods and cultural practices

Over 1.6 billion people depend on forests for some aspect of their livelihoods, but only about 9 percent of the world’s forests are legally owned by forest-dependent and Indigenous communities. People without land rights have no legal power to influence REDD projects.[6] In order to protect investments, project developers need to keep people from using the forests, especially those who depend on them. REDD pilot projects have already encouraged forest enclosures, arrests, and evictions; cases in Kenya[7], Congo[8], Papua New Guinea[9], and elsewhere[10] have raised alarms among human rights advocates.

The UN definition of forests is vague enough to include monoculture tree plantations (such as oil palm, pine, eucalyptus), as well as clearcuts (termed “temporarily unstocked areas”) and genetically engineered (GE) trees.[11] While forest-dependent peoples are reduced to wage-labour, national and corporate entities will be enabled to “temporarily unstock” forests before planting new trees.

The working definition of forest degradation includes such activities as shifting cultivation, foraging, collecting medicinal plants, and accessing sacred sites—meaning most the activities of forest-dependent communities. Yet science has shown that those who can best protect forests – indeed, those who have protected forests for millennia – are those who live in them.[12] It is precisely the lure of the market that forces forest dwellers to succumb to external pressures to degrade and destroy their own homes.

Carbon offsets are a false solution to climate change

REDD projects can be financed through “carbon offsets”: the CO2 saved when forests are left standing is purchased to “offset” CO2 released by polluting industries. Purchasing these offsets allows rich countries and companies to reduce their emissions on paper, without making real changes. The result is no actual reduction in greenhouse gas emissions at the source. Even public funding for REDD-readiness is widely seen as a gateway toward carbon-market based financing. When forest protection projects are financed through public sources, they should use another name to draw the distinction from market-based REDD.

Forests need to be protected – not commodified

Turning forests into mere carbon sinks and giving them enhanced economic value can be expected to encourage private investors to buy up lands that do not have a clear title, leading to displacement of forest dependent communities. Further, while treating forests as carbon sinks and commodities may create economic value, it greatly diminishes their intrinsic value as forests.[13]

The Carbon Market is inherently volatile and vulnerable to failure[14]

The UN says REDD is about “making the private sector part of the solution by providing the kinds of market signals, mechanisms and incentives to encourage investments that manage and conserve the world’s nature-based resources rather than mining them.”[15] “If REDD can be structured right,” the UN literature says, “the money will be made not just by carbon traders, but also by developing countries and communities for providing the forest-based carbon storage service.” But can REDD be structured right? When the carbon bubble bursts, it is forest-dependent communities who will suffer the impact. The current calculated price for REDD credits is as low as $4 USD – 6 to 8 times cheaper than other offsets.[16] This makes it cheaper to buy pollution permits through REDD offsets than to reduce emissions. And because forest carbon is inherently volatile (trees eventually die and release their carbon; forests are subject to natural flux from fires, pests, aging, and natural disasters), this biological carbon cannot be equated with fossil carbon emissions that are permanently released into the atmosphere.

Most REDD projects provide a combination of jobs, services, and cash payments to affected community members.[17] Some provide payments to meet basic needs, or directly provide services like health clinics or schools. Still others offer gifts like laptop computers and fuel-efficient cooking stoves. But bringing people into the cash economy or offering them social services is no replacement for traditional livelihoods, cultures, and place-based traditions. Indeed, by buying people out of their forest-dependent livelihoods, REDD will leave forests more vulnerable to predatory interests – not less.

The President of Guyana has argued that the country should “proceed full-steam ahead with exploitation of forestry resources” in order to reap the benefits of “avoided threatened deforestation.”[18] In other words, countries are increasing deforestation now in order to earn more revenue when REDD comes into effect because they will be able to decrease their deforestation by a greater amount.

If measurements of carbon stored in REDD projects are inaccurate, or if deforestation is stopped in one area but increases elsewhere as a result, then overall emissions increase (both from the activity seeking the offset and by the deforestation).[19] And, because project developers rely on concessions, regional deforestation rates, and other market-based indicators to calculate carbon futures, we can never really know if forests were in fact saved. Since there is nothing in REDD to stop a project developer from cutting down native forest and replacing it with a plantation, REDD may result in more deforestation, not less.

REDD is not rights-ready

The vast majority of REDD projects thus far are not based in the Free Prior and Informed Consent (FPIC) of the communities who live in the affected forests. In many countries, benefits from REDD projects will flow to the government, or to the private project developer, instead of to the communities who have managed the land for generations. This leads to inherent violations of FPIC and other human rights safeguards guaranteed through the UN Declaration on the Rights of Indigenous Peoples.

REDD is still evolving, but it doesn’t bode well

The final form REDD will take is still being negotiated. There are many who defend REDD for valuing ecosystems services; there are others who see it as the only way to protect forests and stabilize the climate. But whatever form REDD takes, even if it includes Human Rights safeguards, it will be designed to allow industrialized countries and polluting industries to continue polluting while forcing subsistence-based communities into the market economy. Corporations and countries responsible for the climate crisis need to take responsibility for their own emissions and cut them at the source. And the human and environmental rights and cultural practices of forest-dependent peoples need to be respected.

To learn more and to follow the debate on REDD and climate solutions, visit: http://climatevoices.wordpress.com/