In December 2006 two members of the MAO (Environmental Movement of Olancho), Roger Iván Murillo and Francisco Heraldo Zúñiga, were assassinated in a death squad execution style killing. They were killed for their part in defending the forests of the department of Olancho in Honduras against illegal timber felling. Both men had received death threats from logging companies. (For more background on this struggle by Olancho’s environmentalists see ENCA Newsletters 42, 44 and 45.) 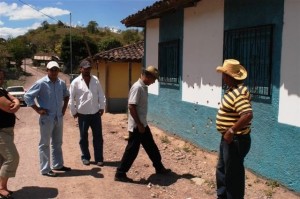 The four assassins who carried out the machine gun execution were members of the local police – Linton Omar Cáceres Rodríguez, Rolando Antonio Tejeda Padilla, Juan José Talavera Zavala and José Arcadio González. Despite a history of impunity for those who commit such crimes in Honduras, the four were detained and were convicted by a Honduran court on 1st July this year.

They were to be sentenced on 15 August and faced up to 30 years in prison. After the conviction they were detained by Brigade 115 of the Honduran army whilst awaiting individual sentencing. In early August two of the convicted, Cáceres and Talavera escaped and a few days later González also fled. As the MAO said on hearing the news: “It is inexplicable that after being found guilty these men were given so many privileges, when by our standards they should have been behind the bars of a maximum security prison because of the danger they represent to society, in particular to the relatives of the murdered environmentalists.”

The MAO has asked a series of other questions about their escape: Who is it that wo 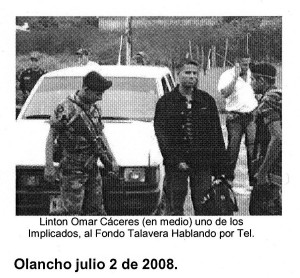 uld want us to2nd July in Olancho: Linton Omar Cáceres (in the middle) and Juan José Talavera (on the phone) in army custody believe that they escaped on their own? Who is it who has helped them to escape justice? Who is behind their escape? Is it the same people who Who was responsible at the Brigade 115 installation when they escaped? Where were these people when they escaped?

ENCA has written a letter to President Mel Zelaya urging him to initiate a thorough investigation into who was responsible for these escapes and to do all he can to ensure that justice is served in this case. The MAO has also demanded that the case of the assassinations be kept open in order to determine the intellectual authors of the original crime.