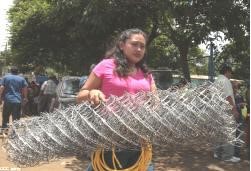 While the Euro zone plunges into meltdown and the governor of the Bank of England predicts the worst crisis in the UK since the depression, innovative new ideas based on relationships of solidarity between countries are being successfully put into practice in the countries of the Bolivarian Alliance for the Peoples of our America (ALBA).

Trade between these countries is being turned into a tool to combat poverty, rather than the enrichment of powerful countries at the expense of the systematic impoverishment of poorer countries. Membership of ALBA has played a key role in the success of Nicaragua in rebuilding its economy, and infrastructure and implementing social programmes that have contributed to reducing high levels of poverty.

Nick Hoskyns from London has worked in Nicaragua since 1997 with rural cooperatives and is now quality manager for ALBANISA, an ALBA food social enterprise. He talks to David McKnight, from the Wales Nicaragua Solidarity Campaign. .

Can you explain what ALBA is?

ALBA means ‘daybreak’, hope, it’s the first rays of the sun. In a country like Nicaragua that has always had people against it – it’s always been a struggle, within ALBA you have a group of countries willing to understand revolution and in a very practical sense willing to support you and help you. I think it’s also important to understand it’s a real southern initiative.

How does ALBA differ from other trading blocs like the European Union for instance?

The difference is that ALBA is about giving and supporting and solidarity. It’s about how countries help each other to develop and it’s about how poor Latin American countries work together to resolve their problems. When ALBA countries get together, it’s not a negotiation of who gets most and who gives least, it’s the complete opposite, it’s what can they do, how can I help you?

…in the European Union when you hear that countries go to negotiate they are mandated to get the best possible deal for their country.

ALBA is an incredible space for innovation, putting ideas into practice within a politically, socially, clear model for the poor and the disadvantaged. I just feel that ALBA is talking sense when I listen to the debates around the bailouts of the banks at the European Union, “what are we going to do with Italy, Spain and Greece, these countries that are bringing the whole European Union down?” It’s all about economics, it’s all about money, whereas ALBA works within a framework which talks about solidarity, which talks about social development, which talks about the health of people, the education of people, for everyone not just those that can afford it.’ 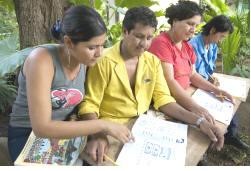 I think ALBA is going to provide an alternative for us in the western world. From what I can see we are pretty lost, we haven’t really got any ideas of where we are going. It can’t be about bailing out bankers and their bonuses. So for me, ALBA really does provide that framework.’

How does the fair trade agreement [between Nicaragua] and Venezuela work?

Venezuela sells its oil to Nicaragua and Nicaragua pays the market price but 50% of the value of the oil is on payment terms of 25 years at 2% interest. Nicaragua invests this money in infrastructural projects – roads, energy – and long-term development. The other 50%, that Nicaragua has to pay in 90 days, Venezuela said to Nicaragua ‘you can pay me back in cash or if you’ve got anything that Venezuela needs then we’ll take your products’. So Nicaragua is now selling very large amounts of products to Venezuela under that fair trade agreement. The major product is meat and livestock, then there’s coffee and beans then there’s milk, cooking oil and sugar. The priority is given to the small farmers organised into cooperatives.

The principle is making sure that the farmers can produce at a price which works for them but also making sure that consumers get a good quality product at a fair price. Fair trade within ALBA is making an enormous difference to both peoples.

What are the benefits of ALBA for Nicaragua?

It’s an integrated approach with lots of different programmes, very specific, very concrete, that benefit the Nicaraguan population. There was Miracle Operation, where every Nicaraguan who had eye problems such as a cataract has had a free operation here in Nicaragua or they’ve been flown to Venezuela or Cuba. People who thought they were never going to have full vision again, have had their sight given back to them. And that’s a successful programme right through all the ALBA countries.

Then there’s the solidarity bonus, where employees who earn less than C$5000 (£150) get a solidarity bonus which is just a top up or a bond, now worth C$700 a month, this is particularly important for low paid women workers.

Electricity was an enormous problem in Nicaragua – we used to have eight hours power cuts a day – we were trying to run our sesame and coffee plants and you never knew when the energy was going to be cut off and now we have got energy production funded through ALBA.

…it is an integrated approach coming from so many different angles. Poverty has gone down 7%. Exports are growing at around 30% ay year. The economy is growing at 4% whereas in the West it is stagnating. So ALBA is working for people directly and it’s also working for the economy as a whole – for big businesses, for medium businesses, for small businesses and for individual families. It really feels like Nicaragua is on the move.

What does Nicaragua contribute to ALBA?

It is very important for Venezuela to have a secure market for its oil. Also Nicaragua provides a great ally within Central America that speaks out on international issues in favour of the ALBA countries. Nicaragua is out there at the United Nations giving a clear, strong voice – an independent opinion from any lobbying from Western countries.

The cooperative movement in Nicaragua has been identified as a possible model for the whole of ALBA. I’ve personally been privileged to have been involved in an interchange between the Cuban and Nicaraguan cooperative movements, Cuba is looking at the cooperatives in Nicaragua as a model for them in the development of their economy. So that’s a great privilege for Nicaragua and Nicaragua is just there, chomping at the bit to help and give something back to any of the ALBA countries. And I truly believe that in the future, Nicaragua is going to provide a real model for the other ALBA countries of how to work in a way that is inclusive, incorporating large companies, medium-sized companies but without compromising commitments to the small farmers and the cooperatives. I think that’s going to be a valuable example for the rest of ALBA.

What’s the future for ALBA?

The thing to understand about ALBA is that it’s about doing and it’s about achieving. So in Nicaragua where you had power cuts, it was decided to invest in energy so there were no more have power cuts. They decided that all disadvantaged children should get at least one good meal a day, that’s happening. Because of the rains and the hurricanes it was decided that everyone should have a roof, ALBA Plan Techo [Roof Plan] provides 12 large corrugated iron sheets to each family that needs it.

ALBA is a group of countries that’s there to develop and to make a difference for the poor and disadvantaged. And, in Nicaragua it’s successful. This is real and it’s working and it’s developing.