Over the last few years, since the demise of the most recent plans for a building of a trans-oceanic canal, relations between Nicaragua and China have grown closer. This short piece from TeleSUR outlines the newest trade link between the two countries. 12 July 2022 ,By teleSUR/MS in the  Newsletter 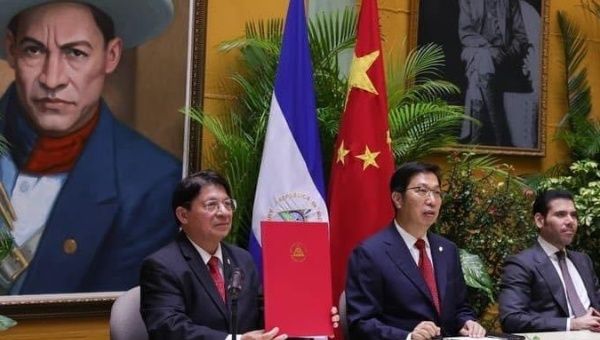 This Central American country signed the “Early Harvest Agreement” (EHA), a trade instrument whose objective is to facilitate the bilateral exchange of agriculture-related goods by establishing preferential tariffs.

“Nicaraguan exports to China could increase by some US$100 million in tariff-free goods. Chinese demand will force us to increase our production,” lawmaker Wilfredo Navarro said, adding that the EHA “contemplates investments from Chinese companies to Nicaragua.”

Recently, Nicaragua and China also signed a Memorandum of Understanding (MoU) for the establishment of the Joint Commission for Economic, Trade, and Investment Cooperation.

This instrument is designed to facilitate the participation of the Central American country in China’s new “silk road”, which implies multimodal interconnection between countries on several continents.

Between January and May of this year, Nicaraguan exports to China reached US$3.1 billion, which represents a year-on-year increase of 19.1 percent.