In January this year [2018] the government of Belize voted to end all oil exploration in its waters. The policy is intended to protect the Belize Barrier Reef World Heritage Site, the world’s second largest coral reef after the Australian Barrier Reef. The reef is home to many endangered marine species such as hawksbill turtles, rays, various species of sharks and manatees. 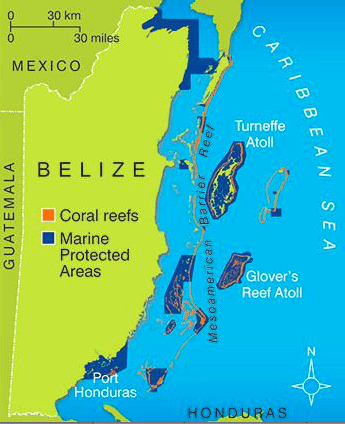 It is rarely acknowledged in the mainstream media, but the ban is in part due to extensive lobbying by environmental groups in Belize since as early as 2006. Significant amongst these groups has been the Belize Coalition to Save Our Natural Heritage. But the decision has also been widely welcomed by international organisations such as the World Wide Fund for Nature (WWF).

Oil drilling puts at risk not just the marine biodiversity that is dependent on the reef, but also the country’s lucrative tourism industry which employs directly at least 25 per cent of the economically active population and indirectly and occasionally many more. Especially significant within the tourism industry is the dive sector which is dependent on the state of the reef. Belizean waters include three of the Caribbean’s four atolls: Lighthouse Reef; Glover’s Reef and the Turneffe Islands. Reef related tourism, fishing and other activities are estimated to have significant economic impact on a half of the country’s population.

By contrast with Belize’s decision, also in January this year Donald Trump opened up nearly all US waters to oil drilling in a move cheered by the oil industry. The decision affects many areas previously protected on environmental and conservation grounds. Clearly his memory covers only a short time span which can be no great surprise – Deep Water Horizon in the Gulf of Mexico appears to have been forgotten already.

On the other hand, Belize’s decision lights the way for developing nations to take control of their own resources and to make decisions for the benefit of their own peoples and environments. Candy Gónzalez (of the Coalition and also of the Belize Institute of Environmental Law and Policy, BELPO), however, points out that, despite the headlines, “it is a moratorium, not a ban.” She adds that “that is one of the problems with it” and that it is “Not what we wanted, but it is something.”