Article reproduced here by kind permission of Grahame Russell of Rights Action and Karen Spring of the Honduras Solidarity Network.

Original posting by Rights Action at: 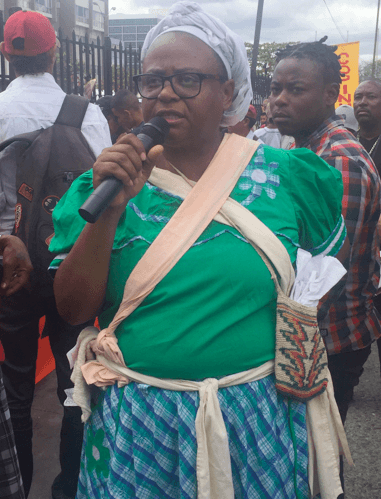 (Miriam Miranda, General Coordinator of OFRANEH demanding justice at a large protest outside of the Honduran Supreme Court in Tegucigalpa on the one-year anniversary of the assassination of Lenca indigenous activist, Berta Caceres of COPINH. Photo: Karen Spring)

The four must go to court, November 24, to respond to these “charges”.  They potentially face up to 2-3 years in jail, and now must spend time and resources (of the few they have) to defend themselves from these manipulative charges.

Miriam Miranda is a leading Honduran Garífuna activist who has faced numerous threats and direct acts of repression for her courageous, articulate long-time work with OFRANEH and other Honduran groups and movements.

The reasons behind the malicious charges against these four Garífuna women are quite simple.  Forseth and CARIVIDA are involved in a major land dispute with the indigenous Garifuna community of Guadalupe in Trujillo Bay, located on the Caribbean coast of Honduras.  Forseth has used several very questionable legal maneuvers in the now (since the 2009 military coup) deeply corrupted Honduran legal system, to criminalize any indigenous Garífuna people involved in land, territory and human rights defence work, in order to further claims that CARIVIDA’s illegal land purchase in Guadalupe was valid.

One of the local woman being charged, Medeline David already faces charges of illegal possession of land as a result of her participation in a community-led land reclamation project to recuperate their own land – land in dispute with CARIVIDA.

Geovanny Bernardez, another OFRANEH leader and other Guadalupe community activists including leader, Celso Guillen, also face charges laid by the Honduran state and CARIVIDA as a result of the same land dispute.

The legal case against Miranda and the 3 women was presented on May 26, 2017 and the first court hearing is scheduled for November 24, 2017.  If found guilty, Miriam, Medeline, Neny, and Letty could face up to 2-3 years in prison.

This defamation accusation is a clear example of how wealthy North Americans use and take advantage of the impunity and corruption in Honduras’ post 2009 military coup political and legal systems to criminalize people that resist their economic interests and projects. 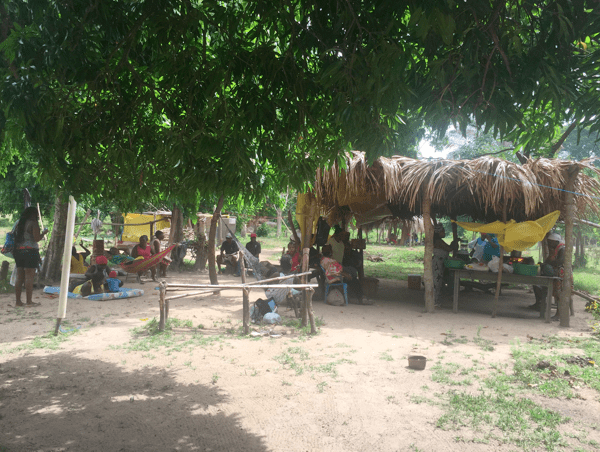 The land defence project in the Garífuna community of Guadalupe in Trujillo Bay. The area where many community members are camping out is the land that is claimed to be owned by Patrick Forseth. Forseth plans to build a resort and villa project on the land. (Photo Karen Spring)

As the General Coordinator of OFRANEH, Miranda is being directly targeted in an attempt to silence the resistance of Garifuna communities not only in Trujillo Bay, but in other land disputes across the coast of Honduras.

Forseth, Jorgensen and other North Americans continue to take control of lands that are inside ancestral indigenous Garífuna titles, some of which date as far back as the 1860s. Jorgensen is facing charges of illegal possession of land for his project Campa Vista owned by his company, Life Vision Development.

Lands To Die For: The Garifuna Struggle In Honduras
December 20, 2016, CCTV Americas
35 minute film about violent and corrupt challenges facing the Garífuna people, lead by the OFRANEH organisation, in the context of the violence and repression, impunity and corruption that characterise the Honduran military, economic and political elites and their international partners.
http://www.cctv-america.com/2016/12/20/lands-to-die-for-the-garifuna-struggle-in-honduras

The U.S. and Canada Have Blood on Their Hands in Honduras
October 22, 2016, by Grahame Russell
http://www.telesurtv.net/english/opinion/The-US-and-Canada-Have-Blood-on-Their-Hands-in-Honduras-20161022-0010.html