Report by Lucy Goodman, for The Violence of Development website.

Lucy Goodman is a marine conservation specialist who in 2010 was an assistant researcher with Martin Mowforth in Central America during the work conducted for the book ‘The Violence of Development’. The positive environmental factors in Costa Rica described by Lucy should be set against the regular reports of environmental contamination associated especially with the cultivation of the country’s export crops.

This year Costa Rica has surpassed a reforestation target by achieving 75 per cent forest cover after a low of 21 per cent in 1987. Since 2014, the country has satisfied more than 95 per cent of its energy demand from renewable sources – predominantly hydroelectric power (‘renewable’ but certainly not impact-free). And in 2017, the Costa Rican Institute of Electricity boasted a record-breaking 300 days of power supplied solely by renewables. Complete electrification of Costa Rica’s buses and taxis is expected by 2050, in line with the Paris Agreement’s net zero emissions target.

The country’s exemplary role in nature conservation, and dedication to climate change mitigation, won it the United Nations Environment Programme’s (UNEP) ‘2019 Champions of the Earth Award’. The UNEP declared Costa Rica pioneers of sustainability and hopes other nations will emulate their decarbonisation template.

For a relatively small country of five million people, Costa Rica, ranked 126th by land area, has a big reputation for ecological and climatic stewardship. This environmental accolade may precede it, given that Costa Rica’s marine territory is ten times larger than its terrestrial equivalent, and until recently, management efforts have solely focused on the latter. The country ostensibly lags behind in marine and coastal protection. Key threats come from pollution and water contamination, the illegitimate development of coastal infrastructure, unregulated shipping and the illegal extraction of marine resources. 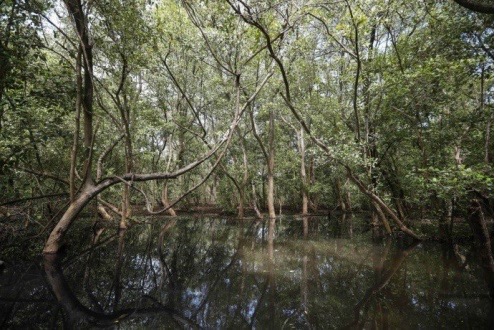 Photograph of a mangrove in the Lower Sea Zone which subsists in the coastal waters of Costa Rica’s central Pacific coastal zone. | Photo: EFE

only equate to less than 3 per cent of the country’s marine territory under some level of protection. Although progressive, this figure falls short of the 10 per cent Costa Rica pledged to protect by this time. By contrast, 13,000 sq.km. of Costa Rica’s terrestrial area is protected; representing 25 per cent of the 30 per cent target.  Each marine protected area (MPA) has unique characteristics and a high ecosystems service value:

Photograph of two herons seeking prey in a mangrove in the Lower Sea Zone, which subsists in the coastal waters of Costa Rica’s central Pacific coastal zone. | Photo: EFE

The ‘Costa Rica for ever Association’ encourages the government, private sector and civil society to fulfil the country’s environmental commitments. Director Zdenka Piskulich said “We may not have reached 30 per cent conservation, but what we are protecting, we are doing well and that is what we, as a country, can showcase to the world.”

Central America has a half century of experience with MPAs; the first official designation was the Peninsula de Cosiguina on Nicaragua’s Pacific coast in 1958.

An assessment by Carlos Espinosa in 2018, identified almost 200 sites in Central America purposefully created to protect oceanic and coastal habitats – although very few are official MPAs and there is dubious variability in their governance and management. A breakdown of these areas per country has Belize with 86, Panama with 45, Costa Rica with 24, Honduras with 23, Nicaragua with 8, Guatemala with 7 and El Salvador with 4. Espinosa’s updated map of Central American MPAs now shows 40 sites in Costa Rica – a doubling since 2018. https://www.google.com/maps/d/viewer?mid=10WJV3Du2j3Cm3vtoMwwmgRHTnwQ&ll=17.829969272589658%2C-89.68465986328124&z=7

Whilst a handful of strategies have been successful, historically most protected areas in the region have not achieved a high level of success, and governments have failed to meet targets. Carlos Espinosa finds that “Poor rural people in Central America do not assign value to protected areas, since they fail to clearly perceive their services in the face of the rush to prosper in a degraded socioeconomic environment where too often the alternative is to fight to survive amid misery, corruption and crime” (Dos Mares). It is this lack of community prioritisation that currently inhibits MPA success in Central America. Dos Mares, resourced by Carlos Espinosa himself, is a voluntary initiative that works with poor communities within the reserves, to help them to perceive their value and identify the opportunities that protected marine areas bring.