The following report comes through Rights Action and is originally from OFRANEH, The Black Fraternal Organisation of Honduras.

Yesterday, the Court in Tela issued a not guilty ruling in favour of the Garífuna community of Barra Vieja, which is being harassed by the Indura Hilton, by means of the National Port Company and the Honduran Institute of Tourism.

The trial against the leadership of Barra Vieja took place after 64 members of the community were put on trial in June of last year.  The court declared them innocent of the crime of seizure of property.  The ruling in the case indicated, among other things: “It is unknown at this time how many hectares or manzanas are registered in favour of the National Port Company, or the Honduran Institute of Tourism, the National Agrarian Institute and the Tela Bay Project.”  There certainly exists an overlap between the various government entities and the investors. However, it remains clear that the land in question is part of Garífuna ancestral territory.

For over four decades, the Garífuna communities in Tela Bay have suffered strong threats to their territory, accompanied by assassination of leaders, promoted by business people and politicians who have sought to create a tourism enclave, refusing to consider the environmental and social costs.

While in Tela the ancestral territory rights were recognized for the Barra Vieja community, last Thursday, September 8, in the afternoon, a contingent of police accompanied by a group of armed civilians attempted to evict a group of neighbours from the community who had recovered a piece of land that had been “sold” in an irregular manner to foreigners. 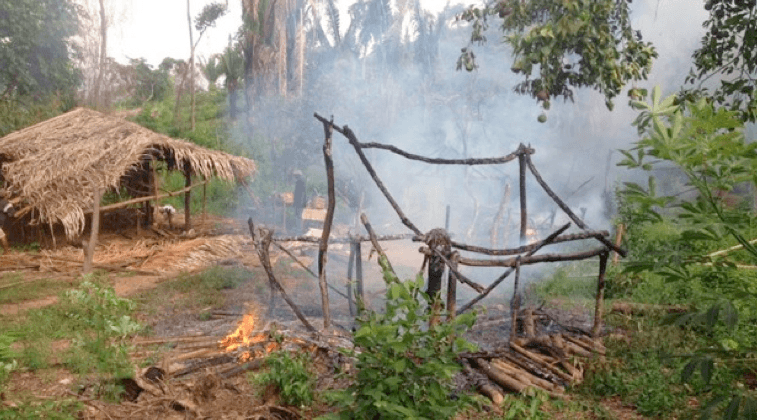 The police presented an order of eviction, issued on April 7, 2016, by judge Víctor Manuel Melendez Castro.  The eviction order was sought by Mr. John J. Scott and Sandra L. Scott, who claim they are the owners of a piece of land in San Blas, located in the Municipality of Santa Fe, Colón.

The use of hired thugs by the police to burn down the dwellings and their contents is, by itself, a violation of the law, as well as violating the rights of the Garífuna people to their ancestral territory.  The members of the community of Giriga (Santa Fe) emphatically rejected the eviction attempt.

During the administration of post-military coup, regime leader “Pepe” Lobo, Jorgensen counted on his unconditional help to obtain environmental permits and “legalize” his projects of real estate speculation and the construction of the Banana Coast cruise ship docks.

In December 2011, the Public Prosecutor’s office issued an order against Jorgensen, accusing him of seizure of property.

Both Trujillo Bay and Tela Bay have become focal points of dispossession in the name of tourism, and the businesspeople and investors supported by the State come and push out the Garífuna communities, which have to endure the overlapping pressures.

With the advent of petroleum production in the Moskitia region, there arises a new threat to Trujillo Bay and its inhabitants: the construction of a petroleum refinery, which endangers the fragile and rich biodiversity of the region.

Rights Action has sent an initial $1,000 to OFRANEH to help the families of Santa Fe whose homes were burnt.