Of the six indicators, G.O.B. received the worst marks in the area of environmental regulations. Candy Gonzalez was 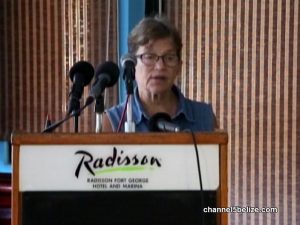 scathing in her evaluation, and told News Five that recent projects have shown that developers have a definite impact on the decisions made by the Department of the Environment.

“I think that we have proof of that in seeing some of the, let’s say, they are called financial investment contracts or host country agreements – the agreements like were made between NCL and the government – and you have to really question where the balance was in terms of the environment and development. I think a lot of things that are already in the pipeline in terms of development highlight the fact that development is taking the lead in the race over protection of the environment, and I think it’s important to each and every one of us to try and direct attention to the fact that you might put money in your pocket today, but tomorrow you might be left with nothing and no way to make a dollar because you’ve sold everything that was of value, and there has to be a balance. There has to be a balance that looks toward the future.” 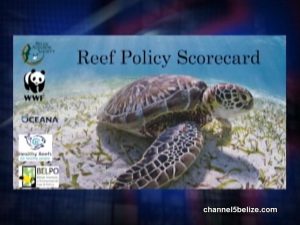 Today, various entities dedicated to the important work of preserving and protecting our natural heritage presented what they are calling a reef scorecard. It’s all about getting Belize’s Barrier Reef System off the World Heritage Site’s endangered list, where it has languished since 2009. So is enough being done to ensure that happens anytime soon? News Five’s Mike Rudon attended G.O.B.’s report card day and has the story.

Belize’s Barrier Reef System is responsible for fifteen percent of the country’s Gross Domestic Product. But it is in danger. It’s a World Heritage Site, but it’s been on the endangered list since 2009 and obviously not enough has been done to get it off. 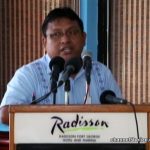 “What we are doing here today is to look at what needs to be done to get the Belize Barrier Reef System off the endangered list and also to ensure that it is a healthy and functioning resource. The indicators of this score card are based on the exact same indicators that are included in the desired state of conservation report that the World Heritage Committee and UNESCO gave to the government. So this is a report that outlines all of the indicators and issues that the government must address in order for it to be reinstated.”

This scorecard is really a report card of how effective government has been in implementing policies and actions to address the indicators. A score of one signified major concerns. A score of two – Some concerns and a score of three – good progress. None of the six indicators received a three, but five of six received a two – meaning that there has been some progress, but not enough. The first indicator was oil, specifically offshore drilling. 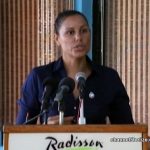 “Roughly eighty-five percent of our exclusive economic zone and our territorial waters would be vulnerable to offshore oil activity if the moratorium was ever lifted, and that really is the key takeaway for where we are on oil that there is pressing need for us to get the moratorium formalized for the government to outline the specific conditions under which that moratorium would be lifted and that is why we have come concerns regarding progress.”

Mangroves was the second, particularly the unregulated removal of mangroves from sensitive zones. 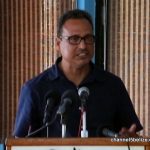 “We have to be able to catalog and recognize the areas that are sensitive in terms of our fishing industry, our tourism industry and in terms of shoreline protection. There is little to no incentive for development to maintain mangroves intact and so we need to revisit that and see how we can improve that.”

The third indicator was Coastal Development and Tourism.

“In February of this year the Cabinet adopted the Integrated Coastal Zone Management Plan after several years. It’s a little late but still good. We welcome that. But at the same time it’s clear that there are insufficient resources being put towards the implementation of the plan, so we have a problem there.”

“We were so optimistic when the Coastal Zone Plan came through, at least I was optimistic that when the plan passed the Fisheries Bill would have followed shortly. We have to give recognition to the government that they did give the Managed Access Program started, and that’s major progress. It’s a major milestone for the region and maybe the world. But we need to get the policy in place that would support Managed Access.”

And the fifth – World Heritage Value. 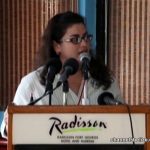 “Yes, we have mentioned the Integrated Coastal Zone management Plan and the fact that that policy is now Cabinet endorsed, but it’s difficult to enforce it, so it needs some kind of legal teeth. What we really were recommending is that within the World Heritage Site that there is an Act or a Bill that can guide development. That was one of the triggers that actually led to our inscription on the endangered list, because we had development within some of the more pristine sites within our World Heritage.”

While those areas received scores of two, the area of Environmental Regulations received a definite score of one – meaning major concern.

“We can’t applaud the Environmental Protection Act like we used to be able to. We’ve had a lot of promises that it’s going to be improved, but until those things are actually put into law, then they’re just words and that’s the problem with a lot of the things called Cabinet decisions and Memorandums and understandings of one kind or another. They can be made in a day and they can be changed in a day.”

According to the organizers and presenters of the scorecard, it’s about making sure that all of us realize that we play a role.

“Government knows…we have regular meetings and regular conversations with our government partners to consult and to talk about how we move forward from here, but it’s just as important for the public to be constantly updated with what is happening, why it’s not happening, how it needs to happening, what are we talking about long term. We are custodians of this but we’re not just custodians, we are direct beneficiaries – every single one of us through all these goods and services and it’s about really thinking about long terms and balancing everything that we have to balance to ensure that we can always benefit from this.”