A blog post by the Centre for International Environmental Law (CIEL)

Reproduced by kind permission of CIEL

Recently, the Inter-American Development Bank (IDB) was poised to provide US $200 million to Guatemala to strengthen “competitiveness” and “security” by implementing fiscal and migratory controls at border crossings with Mexico. 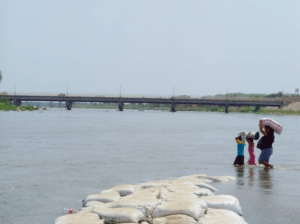 Family crossing Río Suchiate at Tecun Uman on the Guatemala, Mexico border. The IDB planned to give millions to the Guatemalan military to bulk up security at this and other border crossings. Credit: Kelsey Alford-Jones

This project did not immediately stand out among the dozens of projects collected each week by the Early Warning System (EWS) in the region. Indeed, while the EWS seeks to alert communities of all projects under consideration for Bank finance, we focus on projects that have a high risk of causing adverse impacts or rights violations in nearby communities – typically large-scale infrastructure projects, mining, hydroelectric dams, among others.

Yet harmful impacts are not only caused by the physical footprint of a project or by displacement or contamination associated with the operation of a project. Sometimes the way a project is structured, or the choice of its implementing partner, raises equal concern.

In this case, the scale and impact of the project were hard to determine, but I immediately noted the government agency that would receive the $200 million loan and be responsible for overseeing the proposed fiscal and migratory controls: it was the Guatemalan Defence Ministry.

Supporting an Expanded Role for the Military?

Having worked on Guatemalan human rights issues for eight years, this raised serious red flags. The IDB project involved activities that fall outside the mandate of the Defence Ministry, an issue that would raise concern in any country. Yet in Guatemala, these concerns are exacerbated by the recent legacy of intense state-sponsored violence and the nation’s ongoing struggle to define a clear – and appropriately limited – role for the military. For example, fiscal controls fall explicitly within the mandate of a different agency, and empowering the military by giving it control of the programme budget would expand its duties unnecessarily.

Moreover, the military has been linked to numerous corruption scandals and has been shown to have connections to transnational organised criminal groups even reaching its highest levels. For example, there are documented cases of weapons thefts from Guatemalan military bases, indicating a direct flow of arms from the military to criminal organisations. This is echoed by a report by the International Commission against Impunity in Guatemala (CICIG) on arms trafficking, which found evidence of “intentional diversion of military or police arsenals to the black market.”

“Better Control of Migrants On their Way to the US” 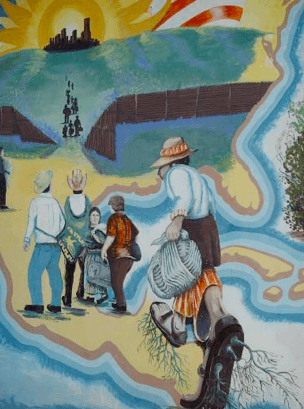 A mural in Tecun Uman, San Marcos – a busy border crossing with Mexico that would receive funding through the IDB project – depicts the story of many Central American migrants forced to uproot themselves from their communities and journey north to flee violence and to support their families. (Credit: Kelsey-Alford Jones)

The fact that the Defence Ministry is the executing agency isn’t the only red flag. IDB objectives listed in project documents also raised concerns. For example, the project explicitly aimed to impede migration of those seeking to travel to the United States.  This objective has been part of a regional effort – pushed by the US and funded by the IDB and others – to address the unprecedented number of migrants and refugees reaching the US border in recent years, including unaccompanied minors, from Guatemala, Honduras, and El Salvador.  In a recent open letter to the IDB, dozens of organisations called on the bank to recognise the complex root causes of migration, which include high rates of generalised violence, as well as targeted violence against women, LGBT people, children, and other vulnerable communities. It is tragic that the response to this regional humanitarian crisis is to block passage of migrants and refugees by bulking up the military’s presence at the border. Importantly, this initiative could also violate international law.

With the project flagged in the EWS, I reached out to partners in Guatemala to share its details and my analysis. I also ensured the information reached border communities who would be impacted by implementation at border crossings. Then, to ensure these concerns were not passing under the radar, I reached out directly to the US government, both in meetings and in a memo that was circulated to US Treasury officials, the US office of the Executive Director of the IDB, and the IDB project team.

Not long after, we were informed that the implementing agency was being reconsidered, and it would no longer be the Defence Ministry. The IDB website also suggests the Bank has halved funding from $200 million to $100 million. Nevertheless, we have yet to see this change reflected on the IDB’s website or receive formal confirmation.

This is a partial win. Guatemalans are more aware of the funding their government is requesting, and the new implementing agency will, hopefully, be the proper one to put new fiscal controls into effect. Yet the overall funding proposal continues to raise concerns, both in the lack of clarity on the specific impacts of the project and in the suggestion that ‘border security’ includes limiting the ability of refugees and asylum seekers to flee their own country.

The EWS team will continue to track the project as it evolves, and having done analysis and outreach while the project is still in the pipeline, we are now well placed to support communities who may be impacted in the future.

Since 1989, the Centre for International Environmental Law (CIEL) has used the power of law to protect the environment, promote human rights, and ensure a just and sustainable society.