In the last year a number of articles have appeared in the international press expressing concern about the recently expanded Panama Canal. Lucy Goodman translated and summarised them for The Violence of Development website in the following article. (Lucy was one of the original research assistants who worked with Martin Mowforth in Central America on the production of the book ‘The Violence of Development’ published by Pluto Press in 2014.) We are grateful to Lucy for her time and effort on behalf of the website. 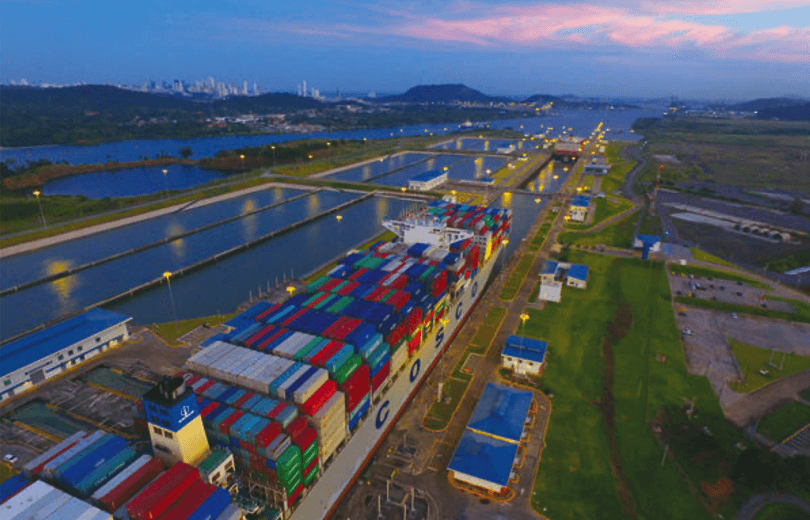 The Panama Canal is one of the great engineering achievements of the 20th century. This watery bridge between the world’s two largest oceans facilitates around 6 per cent of world trade and permits the passage of more than 12,000 ships a year.

First opened in 1914, the Canal recently re-opened in 2016 after a US$5.5 billion expansion to accommodate modern cargo ships that outgrew the original infrastructure. The massive excavation project doubled the Canal’s carrying capacity by creating a second, larger traffic lane and constructing the ‘NeoPanamax’ locks at both Atlantic and Pacific ends; 70 feet wider and 18 feet deeper than their predecessors.

The government agency charged with managing, operating, and maintaining the infrastructure (Panama Canal Authority or ACP), called the expansion a “marvel and a game changer.” Recently, however, the Canal has experienced severe water shortages which have jeopardised its functionality.

The question is: how can a canal connected to two oceans be without water?

The answer is in the extraordinary expenditure of freshwater during the passage of each ship through the locks. The locks rely on an injection of water from artificial lakes. The main reservoir, El Gatún, covers more than 430 km² and provides precious drinking water to the densely populated surrounding area. Before the expansion, an average of 50 million gallons of water was spent (75 Olympic swimming pools) on each passing ship, at a rate of 35 ships a day. Despite the installation of the NeoPanamax locks and their water saving tanks, around 20 million gallons of freshwater is still used on every passing ship. The ACP pay close attention to lake levels and has been on high alert since El Gatún was “well below average” in 2019.

The historically low levels of late have largely been attributed to the global climate crisis. Panamanian hydrologist Cárdenas Castillero said 2019 was among the driest years Panama has seen, with a strong El Niño, and an increase in temperatures and rainfall variability. The Canal’s watershed recorded a 20 per cent rainfall reduction compared to historic averages, equating to the fifth driest year in seven decades. According to the ACP, the temperature in the watershed rose by 0.5 to 1.5°C which caused a 10 per cent increase in evaporation potential from Lakes Gatún and Alhajuela (another reservoir constructed in 1953 to supply the locks).

Carlos A. Vargas, Vice President of the ACP, stated “we’ve had an extraordinarily dry year and have implemented various methods to safeguard the water resource.”

In February 2020 the ACP reduced the daily quota of ships traversing the Canal and limited their draught, to reduce water consumption and ensure successful passage. A fixed tariff charge of up to US$10,000 was introduced to shipping companies for the freshwater they consumed on route across Panama. Another variable charge was introduced which considers the lake levels on the day of the ship’s crossing; the lower the level the higher the fee. As the rain deficits progressed, hydroelectric generation, via the Gatún dam, and hydraulic aid, which assists ships into the lock chambers, were both eliminated.

Panamanian meteorologists could not agree whether the drought would get better or worse at the start of this year’s rainy season, but by the beginning of May 2020 the ACP confirmed that water saving initiatives were having an effect and lake levels could permit larger draught vessels than had been tentatively planned for. The Canal authority states that the water consumption fees will remain in place until the ACP’s fiscal gains recover.

In early September 2020, the Canal Authority officially opened the multi-million-dollar tender to redesign the Canal’s water management system. The publication of the specification is a big step forward in securing the Canal’s water supply for the next 50 years amidst increasing climate variability and future uncertainty. Applicants are expected to submit a portfolio of projects to strengthen and optimize water management. Proposals and valuations should be presented in the final trimester of 2021 and the Canal Authority hope to identify the winning candidate by the end of next year.

Finally, in late September 2020, the result of recent rainfall and successful water management measures allowed vessels with a maximum draught of 50 feet to pass through the Canal, for the first time in 20 months.

Lack of rainfall in 2019 meant the maximum draught had been only 46-feet, until June this year when the Canal’s capacity progressively augmented. Each additional foot of water depth affords around 330 extra containers carried per ship. This favourably impacts the economy of scale and offers an all-round more profitable route.

At the end of the 2019 financial year, a record 450 million tons of cargo had passed between the two oceans and annual revenue reached US$3,365 million, the highest since 1914. The ACP now faces the substantial challenge of keeping the Canal operational whilst preventing contagion of COVID-19. Data from the last two months indicate that the number of ships crossing the Canal has only decreased from 35 ships per day to 34, and that the queue of ships waiting to transit remains at pre-coronavirus levels.