In mid-October, the Costa Rican Legislative Assembly approved the Act of ‘Sustainable Exploitation of Shrimp Fishing in Costa Rica’ (Act 21,478). Despite its title and its claim to sustainability, the act would have opened up the seas around Costa Rica to over-fishing by the use of trawl techniques. Semi-industrial licenses for shrimp fishing with trawl techniques would be granted by the state-run Incopesca (Instituto Costaricense de Pesca y Acuicultura).

Shrimp trawling is condemned by environmentalists and by academics at the University of Costa Rica especially on the grounds that the trawl nets are not selective and collect up other marine species such as turtles and sharks. The Environment Ministry also opposed the legislation, stating that trawling “generates greater pressure on ecosystems and resources that are already over-exploited.”  Mariano Castro of Turtle Island Restoration Network said that “This extremely harmful fishing method should be banned, not brought back.” 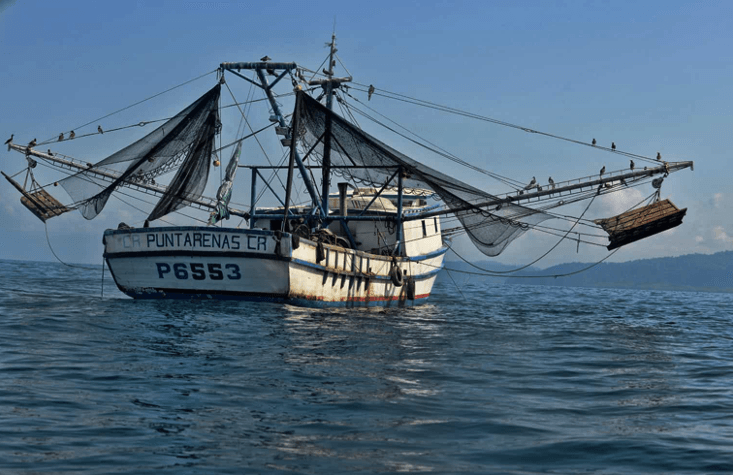 Trawlers drag a net behind them to catch numerous species of fish along with the shrimp, but they also sweep up turtles and other non-targeted species of marine life. Turtles often rest and forage on the sea bed and are likely to be among those species caught up in the nets.

In 2013 the Costa Rican Constitutional Court ruled shrimp trawling to be unconstitutional and declared that it could only be re-commenced if a significant reduction in incidental catch could be demonstrated. Some studies were conducted during the administration of Luis Guillermo Solis and more recently under President Alvarado, but these were rejected on the grounds that they were geographically restricted and/or referred to only two types of shrimp.

A crucial factor behind the Presidential veto of the legislation was public opinion. Dozens of artisanal fishers protested in front of the Legislative Assembly against the reactivation of trawling. On the way to San José they suffered road blocks set up by shrimp workers, who were fearful of losing their jobs. Despite that they managed to change the minds and votes of several deputies. More general public opinion and international influence were also of some significance behind the President’s veto. Another important factor behind the veto, however, was, as Costa Rican journalist Patricia Blanco said, “the pressure of many social sectors and the public in general; Carlos Alvarado also felt obliged to honour his campaign promises.”

It is contended that when trawling was resumed in 2009 the artisanal fleet fell by 70 per cent and that when the last licenses for trawling expired the fish catch and average fish size increased.

The Costa Rica News, 20.10.20, ‘Dozens of Artisanal Fishermen Demonstrated Against Trawling in front of the National Assembly’