Remittances sent back home by migrants who have managed to enter the United States, Canada or European countries are often crucially important in supporting families in low-income countries. Nowhere is this as clear as it is in the Northern Triangle countries of Central America: El Salvador, Guatemala and Honduras. In Guatemala remittances generally account for 14 per cent of the country’s GDP; in Honduras and El Salvador, the equivalent figure is 20 per cent.

Whilst the business world (in the form of CentralAmericaData.com) reported record increases in remittances sent to Central American countries for January and February this year – see table below – and forecast a good year for remittances in 2020, at that time the effects of the pandemic had not been foreseen. This dramatic effect, however, is illustrated by the figures for April 2020 compared with April 2019 – see the table below. 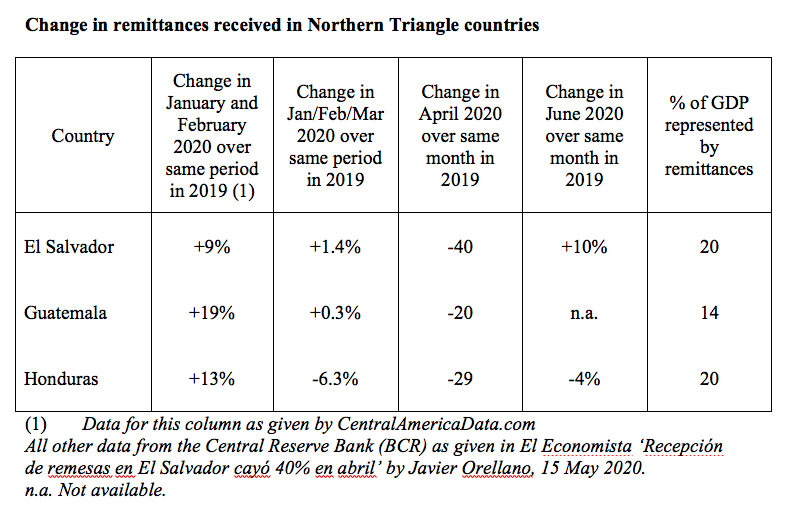 At the level of the family and the household, remittances are often vitally significant for the household economy which in many cases is precarious at best. Unemployment and a lack of opportunities added to a high level of violence in these three countries have stimulated a decades long wave of emigration to richer countries where jobs are more numerous and salaries are higher. In the last two years the phenomenon of migrant caravans from these countries, and especially Honduras, has grown largely as a result of a slightly new balance of forces in which the threats of violence to the family have increased in significance. The economic motive, however, is still highly significant, as are the remittances which improved economic earnings in the rich countries can sustain.

The COVID-19 pandemic, however, caused problems not just for the earners, but also for the recipients of the remittances. Despite these problems, in July CentralAmericaData.com was reporting an increase in remittances to El Salvador of around 10 per cent in the month of June (compared with June 2019), which it believed was due to the ending of the lockdown in the United States and the consequent reduction in unemployment there. This in turn was an enabling factor allowing “a major effort on the part of Salvadorans living abroad to support their families.”

Remarkably too in Guatemala the Bank of Guatemala reported that “in the first seven months of 2020 the country received remittances totalling $5,959 million (USD), a sum 2 per cent greater than the equivalent figure for 2019.”

For the first six months of 2020, on the other hand, remittances to Honduras were down by 4 per cent on the equivalent period for 2019. La Prensa (Honduras) explained: “the majority of these resources come from family members in the United States which has seen employment fall by 13.3 per cent by June following a 4.4 per cent decline in March.”