The Australian mining company Oceana Gold has finally paid compensation of $8 million to the state of El Salvador, complying with the ruling in favour of El Salvador by the World Bank’s International Centre for the Settlement of Investment Disputes (ICSID)

In October 2016, after seven years of a multi-million dollar dispute promoted by the mining company, ICSID adjudged in favour of El Salvador and ordered the company to compensate the country to the tune of $8 million for the costs incurred in the litigation.

Minerales Torogoz, an intermediary, gave notice that it had arrived at a “friendly settlement with the Republic of El Salvador” and paid “$8.97 million to the Republic’s Office of the Attorney General. This represents the full payment of the tribunal’s decision.” 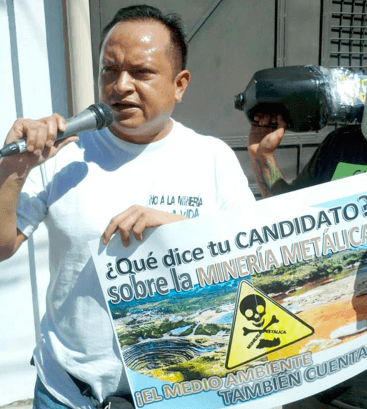 Oceana Gold also committed itself not to seek the annulment of the tribunal’s decision once the Attorney General’s Office had complied with its commitment. Moreover, it confirmed that it has no plans to continue with mining activity and the land in San Isidro may therefore be used for agricultural projects, other enterprises and for sustainable living.

In the department of Cabañas it is still demanded that the El Dorado Foundation and Minerales Torogoz withdraw from the lands of the affected communities, particularly from the Municipality of San Isidro. Héctor Berríos[2] (shown here) of MUFRAS-32 said that it seemed suspicious that after announcing the “friendly settlement” the Company also announced that it won’t be withdrawing from the territory where it had generated so many negative impacts such as rupturing the social fabric, drying up the sources of water that supply the communities with this vital liquid, etc..

According to Berríos, the anti-mining struggle must not let its guard down; he felt sure that this might be another of the company’s strategy. The social and environmental activist stated that the company could be killing time until the 2018 elections in the hope of a favourable outcome in the Legislative Assembly, in which a majority of right-wing legislators might be achieved; this could reverse the Law of Prohibition of Mining approved in March 2017.

1  Voz is an application that allows NGOs and social movements to publish reports, photos and videos on a geospatial database accessible at a global level. It is managed by Doug Specht who also manages this website.

[2]  Héctor Berríos is featured in the El Salvador interview section of this website.