Government and company repression feared at community protest against harms and losses caused by Goldcorp’s “Marlin” mine, from 2004-2017

FREDEMI (San Miguel Ixtahuacán Defense Front), representing communities in resistance to Goldcorp’ Marlin mine, and PLURIJUR (Pluricultural Justice Association of Guatemala) denounce that Goldcorp has, after 13 years of operations, left a legacy of health and environmental harms, family and community divisions and violence, against the collective rights and well-being of the Mayan Mam people of San Miguel Ixtahuacán and Mayan Sipakapan people of Sipakapa. 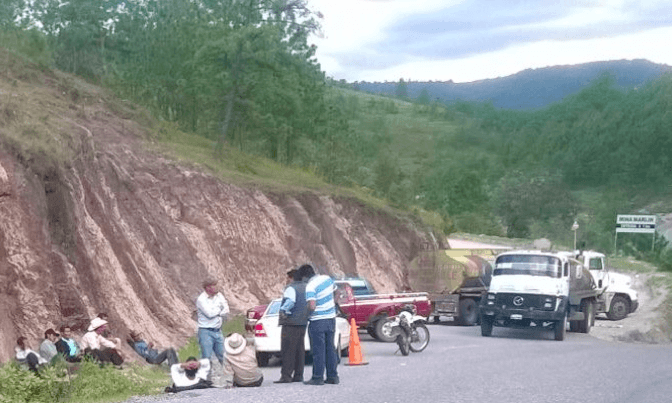 One of the Goldcorp mine entrance blockades
Photo @ FREDEMI, July 1, 2017.

We are happy that as of May 30, 2017, mining operations ended, including the use of explosives that so harmed and terrified our communities and children.  Moreover, the explosives kept on causing structural damages to our homes and buildings.

But, since the suspension of mining, Goldcorp has refused to pay for harms and losses it has caused since 2005, as corroborated by a Verification Commission set up by the Mayor’s office.  In April of this year, we formally presented over 200 personal and community files, documenting the harms and losses.  Three times – April 5, May 11, June 4-5 – we had meetings, and each time Goldcorp refused to accept any responsibility. Thus, on June 26, 2017, we began a peaceful blockade of the entrances to the mine, demanding that the Guatemalan government and Goldcorp engage in serious discussions about how to repair the harms and losses they caused.

We have been subject to threats and acts of intimidation by private security hired by Goldcorp and the National Civilian Police, including an incident when a police officer put his pistol to the head of one of our community members.  We fear a violent reaction in any moment.
We call on national and international solidarity to support us as we protest peacefully in favour of the complete reparation of all harms and losses caused by Goldcorp, from 2004-2017.

Copyright © 2017 Rights Action, All rights reserved.
Our mailing address is: