Taken from ENCA 84, newsletter of the Environmental Network for Central America (ENCA) 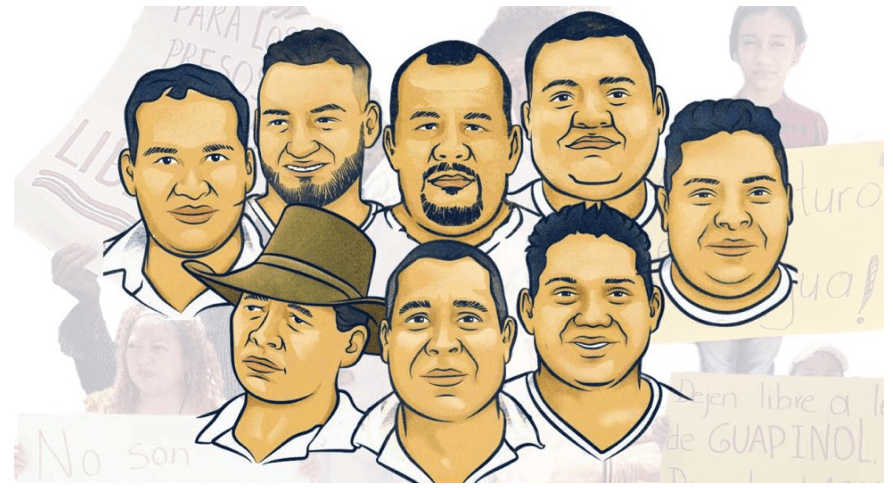 The eight Honduran water rights defenders, who had been in pre-trial detention for two-and-half years, were finally released in February 2022, after some bizarre legal shenanigans.  They had been accused of crimes against the mining company Inversiones Los Pinares (ILP) in a case condemned as politically motivated by a range of legal and human rights experts.

The Guapinol 8 were arrested after opposing a huge open-cast iron oxide mine which has polluted rivers relied upon by over 42,000 people (see ENCA 75 and 78).  The mine is owned by Lenir Pérez, already notorious for human rights abuses related to his mining explorations in La Nueva Esperanza, Atlantida department, and his wife, Ana Facussé, daughter of the late Miguel Facussé, the palm oil baron associated with the murder and intimidation of land rights defenders (see ENCA 56).

The mine is located in the Bajo Aguán region, in the Montaña de los Botaderos Carlos Escaleras National Park, in Tocoa municipality. Despite the Park being protected territory, the state altered the boundaries of the Park’s no-development (‘nucleus’) zone in 2012 to accommodate the mine, which went ahead without any community consultation, in violation of the law.

On 7 September 2018, during a peaceful demonstration against the mine, one of the protesters was seriously wounded by shots fired from a car reportedly belonging to ILP. This was never investigated, but the authorities brought charges against the protesters for the alleged kidnapping of the ILP’s chief contractor as well as damage to ILP property. The case was condemned because of its many irregularities, such as the fact that the contractor repeatedly changed his testimony, while independent video evidence showing that the protest was largely peaceful was ignored.

At their trial, which finally took place on 9 February 2022, six of the Guapinol 8 were found guilty in a verdict described as “outrageous” by Amnesty International.  Unexpectedly, the next day, the Supreme Court issued a judgment accepting appeals filed months earlier that challenged the constitutionality of the charges and the pre-trial detention. However, it was only 14 days later, with much foot-dragging (and after an additional ruling by the national Court of Appeal closing the case) that the local courts finally released the remaining six.

Honduras’ new president, Xiomara Castro, had called for the Guapinol 8’s release at her inauguration in January, and so the delays by the local courts could be seen a means of showing contempt for her regime.

* From 2011 to the end of 2013 Jill Powis served as a human rights accompanier with PROAH (Honduras Accompaniment Project) which accompanied a range of threatened organisations in the country including COFADEH and COPINH.