A paper published in the journal of The Extractive Industries and Society analyses ecological distribution conflicts (EDCs) related to the mining industry in Guatemala. The paper was written by Bernardo Aguilar-Gónzalez, Grettel Navas, Carole Brun, Andrea Aguilar-Umaña and Paloma Cerdán for the Fundación Neotrópica in San José, Costa Rica – (www.neotropica.org) – and is generally cited as: Aguilar-González, B. et al ‘The Extractive Industries and Society’ (2018).

The paper presents results of a UNDP research programme in Guatemala that analyses EDCs generated by the mining industry between 2005 and 2013. First it places the Guatemalan conflict situation in the context of Central America. The analysis that follows this introduction covers the main social and ecological consequences of these conflicts, the role of the State and the effectiveness of actions taken by extractive companies through corporate social responsibility (CSR) programmes.

Rather than include the whole paper in this website (where we try to make issues as short and accessible as possible), Bernardo Aguilar-González, the Executive Director of the Fundación Neotrópica, has kindly given us permission to use selected extracts and diagrams from the paper, for which we are very grateful. These extracts follow. The whole paper can be found at: https://doi.org/10.1016/j.exis.2018.02.002

The paper follows the line of research on EDCs that has been led by the Autonomous University of Barcelona through the Environmental Justice Atlas (EJAtlas – http://ejatlas.org). The EJAtlas documents EDCs and this documentation has allowed a statistical political ecology analysis to be made by the researchers. Figures 1 and 2 for instance make use of the EJAtlas documentation. 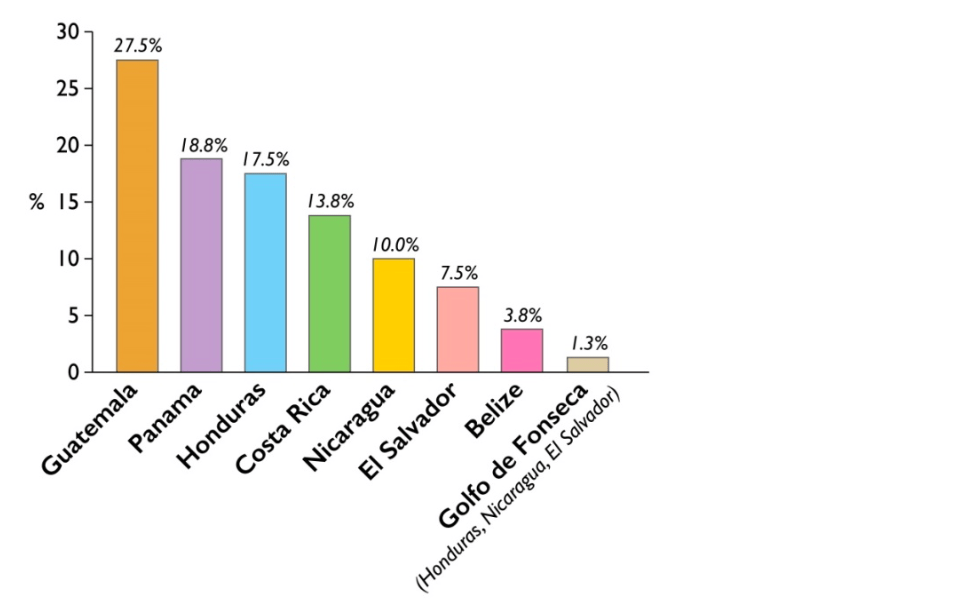 Figure 2 shows us the registry of 80 conflicts up until 2015 in Central America. From these, 29% were conflicts related to mining activities – more than a third of them appear in Guatemala. Conflicts related to water management are 24% of the total. These include conflicts related to hydroelectric projects. Those categories that relate to the appropriation of biomass and physical space, mostly by plantation activities and for biodiversity conservation, are 25% of the total. Conflicts that relate to tourism are 9% of the total, mostly concentrated in Costa Rica. Fossil fuel energy shows 9% of all conflicts while the record also shows conflicts from logistical infrastructure development (related to the Panama Canal and to projects such as Nicaragua’s Grand Canal); and real estate development (5%) (Navas, 2016). 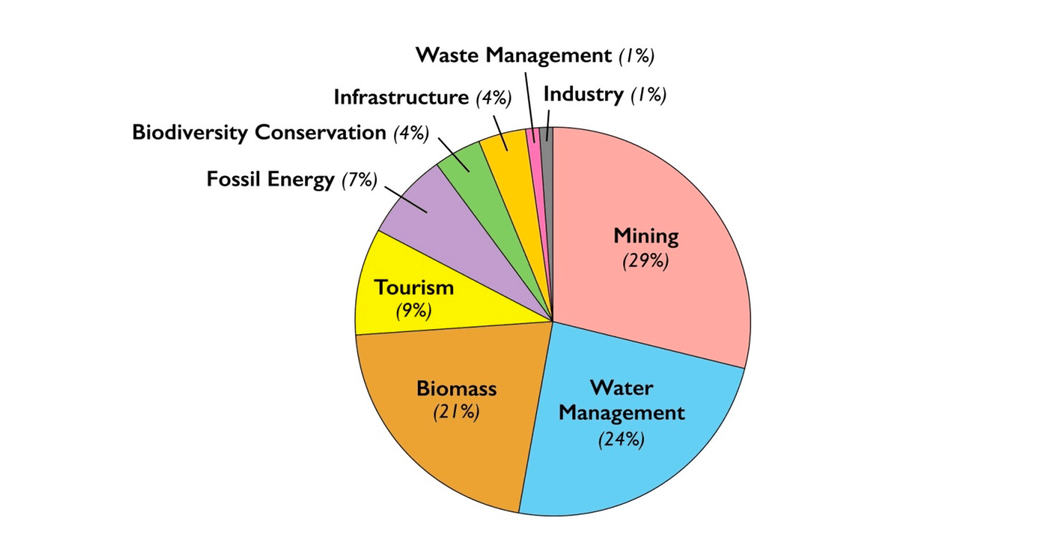 EDCs in Central America have been increasing in numbers in the last decades, coinciding with the increase in neo-extractive activities. Data from the EJAtlas shows this trend with peaks in 2006-2007 and 2011-2013.

The EJAtlas also shows a trend which is basic to understanding the diverse roles that the State plays in Central America. Costa Rica and El Salvador show the highest rates of what the Atlas calls environmental justice successes – see Table 1. These are cases where projects have been stopped from happening. In these countries courts have declared mining projects illegal and both have banned open pit mining largely due to the action of civil society organisations.

Guatemalan mining has evolved historically in parallel with the transformation of its social metabolism and the unfair appropriation of environmental space by the Spanish, ladino oligarchies, and later by transnational-local economic groups which concentrate power and wealth. ….

In 2003 an exploitation license for gold, silver, zinc, lead, iron, copper and mercury was granted to the transnational Glamis Gold Ltd in the department of San Marcos as ‘Proyecto Mina Marlin’. Glamis Gold is the owner of the Guatemalan subsidiary Montana Exploradora Guatemalteca S.A.. The inhabitants of Sipakapa and San Miguel Ixtahuacán (largely Maya-Quiche, Sipakapense and Maya Mam peoples) and environmental organisations manifested their rejection of the mine. They were concerned about the environmental impact, the lack of popular participation from the communities that surround the project and the violation of indigenous territories of collective property already protected by international legislation. In the spirit of the International Labour Organisation’s Convention 169 (ratified by Guatemala in 1996), on June 18th 2005, the first self-organised community consultation about the acceptance or rejection of the mining project in their lands took place in Sipakapa. Thirteen communities participated. The results were 2,448 votes against the mine, 35 in favour, 8 null and one left blank (van de Sandt, 2009; Yagenova and García, 2009; Laplante and Nolin, 2014).

The beginning of the operation of the Marlin Mine in 2005, marked another fundamental change in the scale of production of metallic mining in Guatemala. The mine evolved to produce 96% of all mining sales in the country between 2005 and 2011. The operation of this project also generated an increase in the intensity and radicalization of the opposition by indigenous communities and civil society organisations to mining projects in Guatemala (Yagenova and García, 2009; Nolin and Stephens, 2010; Laplante and Nolin, 2014). ….

[Readers of The Violence of Development website will be aware of numerous other articles relating to the operations of the Marlin Mine in Chapter 5 of the website.]

At a macro level, the overall contribution of the mining and quarries sector to the Guatemalan economy is expressed in the contribution to the GDP. ICEFI (Instituto Centroamericano de Estudios Fiscales) criticises this contribution as very low. During the period studied it went from 0.61% in 2005 to 0.85% in 2014 (ICEFI, 2014). ….

At the local level, the informants in this study representing the industry stated that many positive economic, social and environmental impacts come through Corporate Social Responsibility (CSR) programmes. They include help to schools, investments in infrastructure, etc.. Some informants criticise these actions as generating dependence on the companies and a privatisation of public services that should be offered by the State or local governments. These actions are used to justify the occupation of environmental space. Additionally, CSR actions are criticised as granting the power to foreign companies to disproportionately influence decision-making at the local level and to cover up human rights violations (ICEFI, 2014; Laplante and Nolin, 2014; Aguilar-González et al, 2015). ….

The criminalization of social protest was also identified as a social impact. Along the same lines, threats, murder attempts and murders of those who oppose mining projects. This type of impact is currently a constant in Latin America being reported by OCMAL (Observatory for Mining Projects in Latin America) and by Global Witness. ….

Another social impact documented in conflicts with greater intensity is the forced displacement by the State with the help of the Guatemalan army, police and companies’ security forces, leading to high indices of violence, violations of human rights ….

Also the competition for territory includes vital elements like potable water. The pollution through chemicals and toxins like cyanide and mercury lead to the contamination of subterranean and superficial water sources. ….

Governments … have claimed that mining activities have a strong positive impact in the economy of the country, generating economic and social development on a local as well as a national level. Studies by technical institutions such as ICEFI have shown that there is no evidence to substantiate this claim (Molina, 2015). ….

Sectors of civil society also condemn the role of a State that has been a promoter of extractive industries and not a regulator, by favouring and promoting the interests of this business sector (national and transnational companies), through the creation and adoption of laws. ….

The Mining Law does not require that the indigenous people be consulted before the approval of exploration or exploitation licenses for mining projects. …. there are no existing mechanisms in the current national legislation to guarantee the participation of the communities and the effective implementation of Convention 169 in mining activities and others. Therefore, especially the indigenous communities have developed their own processes to express their position about the projects that affect them. These are known as ‘community consultations of good faith’, ….