As if problems of labour exploitation, community relations, political bribery, water and soil contamination are not serious enough for pineapple transnational companies, since 2018, and possibly before, shipments of the fresh fruit and processed fruit have become vehicles for cocaine smuggling operations. 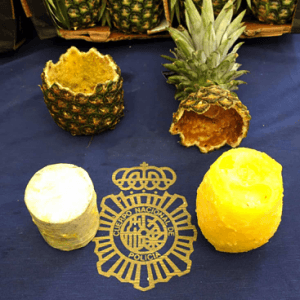 In August 2018 the Spanish police announced that they had seized 67 kilograms of cocaine stuffed inside dozens of hollowed-out pineapples at Madrid’s main wholesale fruit and vegetable market. The shipment had been offloaded at the Portuguese port of Setubal from a ship from Costa Rica. They had then been transported overland to Madrid. The police statement said each pineapple had been “perfectly hollowed out and stuffed with compact cylinders containing 800-1,000 grams of cocaine” and was coated with wax to conceal the smell of the chemicals in the drugs and to avoid its detection (Tico Times, 2018).

In February 2020, in Costa Rica’s Atlantic coast port of Limón, a shipment of over 5,000 one kilogram bags of cocaine (with an estimated value of 126 million euros) was exposed in a container full of canopy plants which were destined for Rotterdam. This was the largest drugs bust in Costa Rica’s history (de Geir, 2020). Three months later, the police in Costa Rica intercepted 1,250 one kilo parcels of cocaine hidden in a shipment of pineapple juice which was waiting to be shipped to the port of Rotterdam. Other 2020 drugs interceptions were also made in January (amongst a shipment of bananas), March (pineapples) and April (bananas) NL Times, 2020).

In August 2020, another container of pineapples destined for Rotterdam was seized by the Costa Rican Drug Control Police (PCD) with $22 million worth of cocaine hidden inside it – 918 packages totalling approximately one ton. The Minister of Security absolved the fruit exporting company of any blame, explaining that the drugs were introduced at some point between the company and the port (Allen 2020).

In February this year (2021), the PCD reported another seizure of cocaine in the Atlantic coast port of Moín, on this occasion including 2,000 packages of cocaine (approximately two tons). Again the packages were hidden in a shipment of pineapples and were destined for Belgium (Agence France-Presse, 2021).

Not surprisingly, Costa Rica now requires that all shipments of fresh pineapple and its related products should be scanned at Costa Rican ports by the General Directorate of Customs (Zúñiga, 2021). The requirement was made by the Costa Rican government in order to defend the reputation and positive image of the country, things that have already been well-tarnished by the Costa Rican pineapple industry.