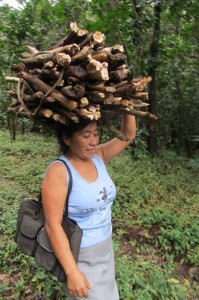 It may sometimes be difficult to see the link between the tortillas served with your meals in Managua and the floods that frequently occur in the city, but it exists.

Tortillas in Managua are cooked over firewood from the higher zones of the city and neighbouring municipalities such as Tipitapa which is one of the most deforested in the country. Jaime Incer Barquero, president of Fundenic SOS and a former Minister of the Environment and Natural Resources, never tires of pointing out the contradiction to the people in the higher zones of Managua: “In the mornings they go down to the city with their carts full of firewood, and later they return with water.”[1] Incer points out that these people do not have any water because they are felling their trees for firewood which they sell in order to buy water. If they didn’t fell their trees, their water sources would still be viable and they could save themselves the journey.

According to the article in La Prensa[2], more than one of the wells of the Nicaraguan Company of Water and Sewage Systems (ENACAL) in the south of the city has dried up. Floods, droughts, a lack of water and even landslides are only some of the most dangerous collateral damage caused, at least in part, by the irrational use of firewood in Nicaragua. “Urbanisation has only increased the use of firewood for cooking. The Young Environmentalists Club believes that the firewood problem is a reflection of two things: the underdevelopment of the country and the difficulty in accessing alternative technologies.”[3]