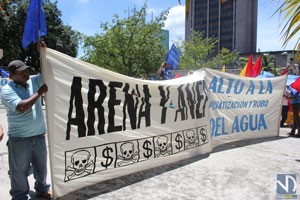 On Tuesday, September 10, representatives of the diverse social movement organizations of the Water Forum held a press conference at the National Legislative Assembly to denounce proposed reforms to the controversial Public-Private Partnership (P3) Law as a back door, right-wing effort to privatize water. The reforms seek to include water treatment and administration among the public goods open for private contracts and concession after the leftist Farabundo Martí National Liberation Front (FMLN) party successfully excluded water from the original legislation.

The Water Forum, which has been pushing for legislation to protect water from privatization efforts for years, criticized the recent formation of an ad-hoc committee by the Assembly’s right-wing parties to study the reforms, calling the move en effort to push through the reforms without public debate. FMLN Legislator Norma Guevara condemned the committee’s creation as “a means to take the issue out of the Treasury Commission and impose a rapid adjustment to incorporate water into the sphere of business, which appears to be one of the clearest interests of the [right-wing Nationalist Republican Alliance] ARENA party’s financial backers, the largest economic groups.”

At Tuesday’s event, the Forum presented a letter to the Assembly (full English text here) demanding the exclusion of any schemes to privatize water from all laws debated in the Assembly and an audience with the ad hoc committee to present their arguments in defense of “the human right to water and its sustainability.” Carlos Flores, a member of the Water Forum, declared: “It’s impossible that ARENA continue to see water as a potential source of profit for companies to do what they like with: contaminate our aquifers, exploit state resources, contribute to the extinction of the country’s rivers. We cannot allow more privatization in this country!”