In 2010 Dominic McCann, Kerstin Hansen, the late Juliette Doman and Michael Farley conducted an interview with Berta Cáceres in her home town of La Esperanza in the department of Intibucá, Honduras. The interview was conducted on behalf of the Environmental Network for Central America (ENCA) which had recently supported a programme of cultivation of medicinal plants run by COPINH, the Honduran organisation of which Berta was the Director. To commemorate the 5th anniversary of Berta’s assassination, Dominic circulated an audio clip (of just under 5 minutes) of their interview with Berta. The clip is in Spanish only, and a link to it is given below the picture of Berta and the text following. 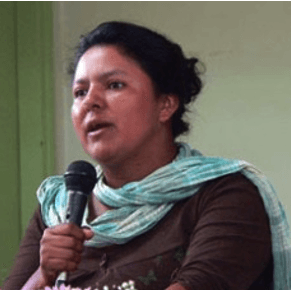 And if you want to hear some uplifting singing from Copinh community: