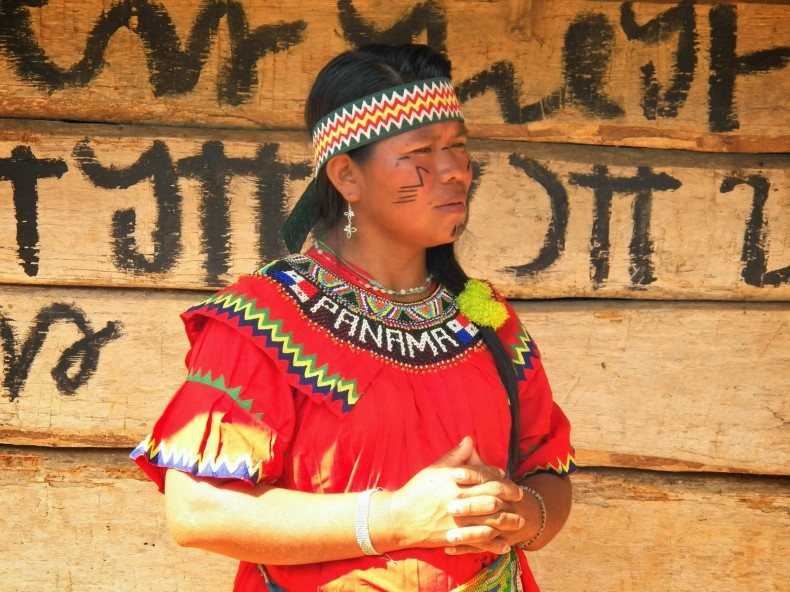 Having fought tirelessly against the unlawful Barro Blanco hydroelectric dam, the indigenous Ngäbe communities on the banks of Panama’s Tabasará river are today threatened with forced eviction at the hands of Panama’s notoriously brutal security forces.

The 29 MW dam, built by a Honduran-owned energy company, Genisa, received funding from three development banks: the Dutch FMO, the German DEG, and the Central American Bank for Economic Integration (CBIE). The project was approved by the Panamanian government without the free, prior, and informed consent of the affected indigenous communities, who now stand to lose their homes, their livelihoods, and their cultural heritage.

Aside from providing precious sustenance in the form of fish and shrimp staples, and as well as supplying rich silt loam ideal for plantain cultivation, the Tabasará river symbolizes the spiritual lifeblood of the Ngäbe communities on its banks, including the community of Kiadba.

Earlier this year, Kiadba hosted a conference celebrating the 50th anniversary of the ‘discovery’ of the Ngäbe writing system. Bestowed in dreams and visions to the followers of the prophetess Besiko – a young woman who sparked a Ngäbe religious movement called Mama Tata – the written language of Ngäbere is today disseminated in only a handful of schools, including the educational facility in Kiadba.

Attended by hundreds of followers, the conference culminated in a solemn ritual at the site of ancient petroglyphs on the river, whose abstract carvings describe myths and history of the river, including the story of a Tabasará King, who ruled the region prior to the Spanish conquest. Neither the petroglyphs nor Kiadba’s language school are cited in Genisa’s impact assessment – a deeply flawed document according to a UN study in 2012, which concluded that both would be lost forever under reservoir waters if construction of the dam was completed. 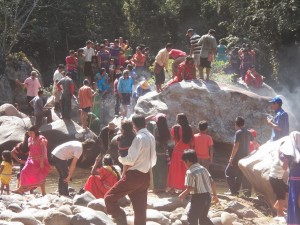 Followers of Mama Tata at the petroglyphs (Photo: Oscar Sogandares)

Facing the threat of inundation, the Ngäbe have now established blockades and camps on the river bank to prevent Genisa’s machinery from encroaching on their land. The company recently crossed the water to an 800m wide strip dividing the communities of Kiadba and Quebrada Caña, and commenced felling lumber in the gallery forests. The government has now issued a formal warning demanding that the Ngäbe vacate their lands – today, 17 February 2014, is their deadline.

Sadly, there have been episodic clashes between the police and Panama’s indigenous minorities throughout the four year tenure of President Ricardo Martinelli, who is set to stand down after elections in May. All of those incidents have resulted in injuries to unarmed protesters, and in several shameful instances, permanent injury or death. Despite the disturbing ease with which Panama’s security forces commit acts of violence, the Ngäbe are standing firm. They ask solidarity and vigilance from the international community at this uncertain time.

* Based in Central America, Richard Arghiris is a freelance journalist and guidebook author who writes about responsible travel, human and indigenous rights.