International investors withdraw completely from Agua Zarca project. Dam was one of hundreds of projects sanctioned after 2009 military coup. 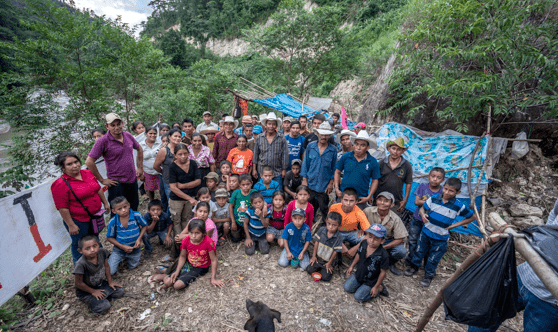 Members of Copinh, the organisation headed by Berta Cáceres before she was killed.
Photograph: Giles Clarke/Global Witness

The international funders behind the hydroelectric dam opposed by murdered Honduran environmentalist Berta Cáceres are withdrawing from the project, the Guardian can reveal.  Three financial institutions had pledged loans worth $44m for the Agua Zarca dam on the Gualcarque River, which is considered sacred by the Lenca people and which Cáceres campaigned against before her death.

Her murder last year triggered international outrage and piled pressure on the international backers to pull out of the project amid a campaign of intimidation against communities opposed to the dam. The Civil Council of Popular and Indigenous Organisations of Honduras (Copinh) – the campaign group Cáceres co-founded – has long demanded that investors withdraw and make reparations for the human rights violations linked to the project.
Desarrollos Energéticos SA (Desa), the private company behind Agua Zarca, has two major shareholders: Potencia y Energia de Mesoamerica (Pemsa), a Panama-registered company whose president – former military intelligence officer Roberto Castillo – is also president of Desa. The other, Inversiones Las Jacaranda, is owned by the powerful Atala Zablah family, who are also on the Desa board.

Desa secured loans from Dutch bank FMO, Finnish finance company FinnFund and the Central American Bank of Economic Integration (Cabei).  Berta Cáceres wrote to FMO in 2013 after the murder of her colleague Tomás Garcia, asking them not to finance Agua Zarca amid violence against the community. Despite her plea, the loan was granted.  Cáceres was killed in March 2016 after receiving multiple death threats linked to her campaign, and just a few months after her name appeared on a military hitlist, a Guardian investigation found.

So far eight men have been charged with the murder including three with military ties, but the intellectual authors remain free.
FMO and FinnFund suspended their loans after police arrested a Desa employee in connection with the murder in May 2016.  But all three investors have now decided to withdraw completely from the Agua Zarca project. In identical statements FMO and FinnFund told the Guardian they “intend to exit as soon as possible. However, project financing being a complicated field, many aspects and issues have to be cleared from contractual and responsibility perspectives.”

The Cabei, the largest investor, has simply stopped loan payments rather than seek a formal break in contract.  “The bank is no longer funding the project. Nor is there any intention to further invest in the project. Each bank is going to have their own exit strategy. Our bank stopped all disbursements,” spokesman Juan Mourra said in a statement.
Desa received $17m – just under 40% – of the loans before payments were suspended. The loans have not been sold, the Guardian was told.

An investigation commissioned by FMO following Caceres’ murder largely blamed the violence on intra-community disputes and downplayed abuses by state and private security forces linked to the dam.

Francisco Javier Sanchez, a Copinh leader representing the Rio Blanco community said that thugs continue to harass those opposed to the dam. “We demand the [investors] withdraw from Agua Zarca and recognize the violence and serious human rights violations the project has caused [in the past] four years of repression. We have rejected a hydroelectric project on the sacred River Gualcarque,” he said.

The Agua Zarca dam was among hundreds of environmentally destructive projects sanctioned after the 2009 military coup d’etat without legally required community consultations.

At least 124 campaigners opposing mines, dams, logging and tourist resorts have been murdered since 2010, making Honduras the most deadly country in the world for environmental and land activists.

Such projects have been backed by prominent Honduran politicians, business figures and military officers, but many are bankrolled by international funders.

*******
The above article was reproduced here with permission from Rights Action. Since 1998, Rights Action has been funding the community development, indigenous rights and environmental defense work of COPINH.