The Nicaraguan mining project in the district of La India, a concession by the Nicaraguan government to the British Condor Gold mining company, covers some 313 km2, in a mixture of underground and opencast work.

The Nicaraguan government’s newsletter Informe Pastrán quotes Condor Gold’s Nicaraguan manager, engineer Aiser Sarria Sirias. He explains that this project will be an example for the modern mining industry, in full understanding and compliance with international standards in terms of environmental protection and sustainability, risk prevention and safety.

A report from the Communal Movement of Mina La India, however, refutes these claims. The Movement has filed a claim within the World Bank’s ombudsman system, stating that the project violates both national and international laws, with a resurgence of repression of local activists. Members of the community are concerned about the depletion of groundwater resources, access, impact on the ecosystem, possible seismic activity risk, and involuntary displacement.

They report that on November 15th (2018), Canta Cruz de la India was occupied by riot police to interfere with local opposition organising. Houses have been searched and anti-mining activists interrogated without legal grounds, they claim. Olmán Onel Salazar, a member of the community and the National Movement against Industrial Mining, MONFAMI, is currently in hiding from this persecution.

Nicaragua is regrettably no exception to the regional pattern of local communities fighting against the well-known impacts of mining, while the government and international mining industry try hard to suggest that their projects will be the exception and escape such downfalls – despite the enormity of their impact.

The CIEL (Centre for International Environmental Law based in Washington DC) has sent news about reprisals taken against environmental defenders who protest against the Santa Cruz de la India mine. This brief article occurs almost one year after the article about Mina la India from April 2019 listed above this one in the website. The more recent one supports doubts about the claims made for the environmental and social practices of the mine by the British owned Condor Gold mining company and the Nicaraguan government. This more recent report from CIEL suggests that the mine continues to be associated with a pattern of repression.

On December 18, 2019, a group of approximately 15 police in full riot gear raided the home of Olmán Salazar, a leader of the Community Movement of Santa Cruz de la India, which has organised in opposition to the La India gold mine project of UK-based company Condor Gold. The police handcuffed, interrogated, and physically and verbally assaulted Sr Salazar and family members present at his home.  Police also confiscated Sr Salazar’s computer, telephone, and other personal possessions, which they have retained to carry out an investigation. Sr Salazar fears additional criminalisation may result from this investigation.

Notably, this incident occurred just days after Sr Salazar presented a public statement regarding the 2019 divestment from Condor Gold by the World Bank’s International Finance Corporation (IFC) at a press conference held by the Movimiento Nacional Ambiental Frente a la Minería Industrial (MONAFMI). To CIEL’s knowledge, this statement issued to the Nicaraguan press represented the first public announcement made in Nicaragua about the IFC’s divestment.

For several years, defenders and community leaders had called for the IFC’s divestment from the mining project due to the project’s major impacts on water sources and the environment. They hail the IFC’s decision to divest as a victory for the movement.

The MONAFMI statement in Spanish, as well as an English translation, are available below:

CIEL has worked with affected community members and partners in Nicaragua to raise awareness about previous acts of police intimidation and harassment against community members for their opposition to the project.

Written by Alfredo Carias
Published 15 August 2018 by ACAFREMIN (Central American Alliance Against Mining) – http://www.acafremin.org/
We are grateful to Alfredo Carias for permission to reproduce this article here.

In the midst of the socio-political crisis which hit Nicaragua in 2018, the mining company Cóndor Gold took advantage of its influence and various legal spaces to obtain an environmental authorisation to continue exploiting the natural resources of the Santa Cruz de La India community. 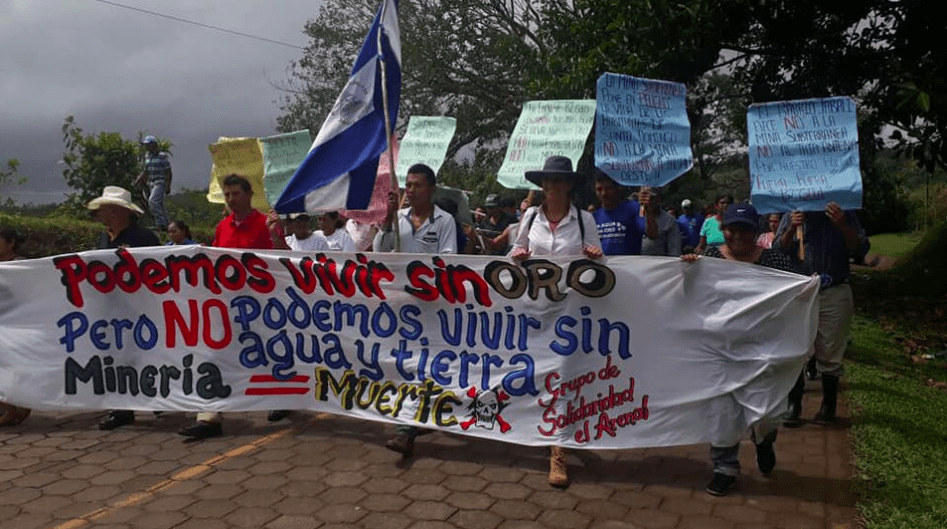 The people of the Mina La India community did not recognise the dubious public hearing process carried out by Cóndor Gold which it claims validates the opening of an opencast cleft of approximately 600 meters in the zone. This would put the security of the families who live in the area at risk. “Once again the people of Santa Cruz de La India are not giving in and are not selling themselves. So we say: Get out Cóndor Gold; our awareness is stronger than your false promises”, explained Olmán Varela, a representative of the National Environmentalist Movement Against Industrial Mining (MONAFMI).

Despite the community’s rejection of the mining project, the company has received the environmental permit from the Nicaraguan authorities for the construction and operation of a processing plant that will have the capacity of 2,800 tonnes a day, an authorisation not considered transparent by the community.

Heizel Torres, a mining expert of the Centro Humboldt, complained that the government of Nicaragua modified the environmental regulations to the benefit of the mining companies by eliminating the environmental impact studies, as was evident in the Mina La India case. This arbitrary act by the government violates due process which should be the right of a community – the right to establish a free, prior and informed consultation seeking the consent or not of the community before the start of an extractive project which may affect health and ecosystems in the area.

As a consequence, the population of Santa Cruz de La India rejected the approval of the environmental authorisation granted to the Cóndor Gold mining company and in a public statement demanded the immediate departure of the company from the community.

The resistence of the Mina La India community dates from 2015, when the company entered the area and provoked a social conflict between the people and the company, leading to confrontations with peaceful protests and huge marches and even the persecution and criminalisation of environmental defenders by local authorities acting under the company’s orders.

The social and environmental conflict rose to an international level due to MONAFMI’s complaint to the Inter-American Commission for Human Rights (CIDH), in which it was revealed that they had suffered threats and harassments for defending their communities. Their statement was made due to the lack of an internal resolution to the problem on the part of the Nicaraguan state.