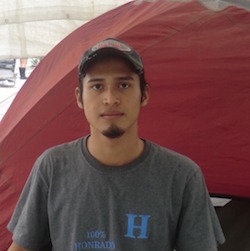 Martin Mowforth (MM): I am going to begin. So, everything is ready, I am recording. So if you want to, only if you want, can you give me your name? [Please note that not all the hunger strikers and members of Los Indignados would wish to give their names due to the likelihood of threats and persecution if their identities are known by the government. Outside the encampment of Los Indignados in the Central Square of Tegucigalpa there is normally a group of plain clothed government officials taking note of who enters and leaves the encampment.]

Gerson Suazo (GS): My name is Gerson Suazo. I am from the department of Santa Bárbara. I have already been here in Tegucicalpa for 15 days. I was involved in the first strike around the Pesidential Palace. We’ve maintained a huge struggle in order to be able to find a solution, a solution to the political, economic and social crisis that now, well, is causing us a lot of problems in our country. This is a momentous struggle to get the president Don Orlando to put in place the CICIHHH the International Commission against Impunity in Honduras, enforced by the United Nations. So, we have been subjected to these problems, social problems, in which all of the sectors of society are involved. There are so many problems of landowners, so many problems, of officials who are involved in a lot of corruption; that all sectors of society have come to us to launch a big struggle, to incorporate everybody in our country.

In fact, from the land, its recuperation, the care of the environment. We are making this struggle so that it can flourish again – really, the culture of our country. In truth they have implanted a sub culture in which, they have made sure, they have erased the identity of with the people and all of the sectors. So the struggle has been going for several months now – it began with mobilisations, which now have become very big, which has been accompanied by different types of protest, such as taking control of roads, occupying government buildings. And a hunger strike which is taking place here in the Central Park. In truth, this represents ordinary citizens who do not belong to any organisation, nor any political party, who are wanting to see a change in our country.

To be able to live with dignity and that everyone’s rights are respected, we are at the limits of our country Honduras.

This is a very big fight that we have taken on. Unfortunately we have not had any response from our President. So that he heeds the call and the demands that our people are making. So then, the president is taking underhand actions, wanting to create a CICIH but one that is imposed by him. It’s more commonly known by the Honduran people as CHICHI, they say the CHICHI, because it is a lie, thus it is a farce, what he is doing. And this is what he wishes to create, a system of interaction of Hondurans to fight corruption. But directly what the people ask of him is, if he wants to combat corruption, then it should be with the international commission set up by the UN. The truth is that this is what the people want, and it is the only demand that the people are making. Because the people trust that this is the tool which allows them to investigate cases and take away immunity from people who really should be paying. True? How all the people have paid through a lack of the laws. So there we wish to see them in prison. Unfortunately they have ‘prosecuted’, in inverted commas, people like Elena Gutiérrez, Mario Celaya, who are directly implicated with what has happened and what they have done has angered the Honduran people, that was what they took from the social security. So, they are directly enjoying their liberty – right? They make it appear that they are prisoners, but they put them inside barracks where they are not really confined. They can leave and go directly to their homes and there isn’t any real security keeping them behind bars. So this is what the people want to have, to actually solve in part, true? But the people are willing to continue fighting, to carry on, demonstrating in all areas, all types of pressure to be able to make direct changes. To be able to change the system in this Honduran society. So, we really want a change, more profound change. We trust that we have the tool, but we’re going beyond that, ok? No, we will stay here, even if it’s the start of a fight, which has actually already started but we’ll take it further.

MM: OK, many thanks for that. Certainly you have brought me up-to-date a little. But, at this moment here in this small area, where we are, what are your plans for the future?

GS: Well, what we are doing right now here is raising awareness of the people who, most of all, are not involved in what is the social struggle, the fight for the freedom of our country. Therefore, we are directly here to be able to break this indifference that is instilled in us, that disillusionment that is put into us and that has been filtering through to the people. That splits or drives actions which generate division within the Honduran society. So we are here to demonstrate that we can unite and we can do big things because the intention is to unite all of the Honduran people; without distinction or political allegiance, without distinction of race and without many things which might restrict us in becoming united. We wish to break this individualism which has been imposed to unite the whole society. Because we know that the government is the party of government, the national party, but within its militants there are normal everyday people who aren’t in line with the way the country is governed. So we also want to involve these people so that they demonstrate and are able to unite everyone. Because in solidarity is strength and it is only in this way that we are going to be able to change this. So, this more than anything else is like an epicentre to unite the people, to unite all sectors and, to unite that indifference, to eliminate that which really puts us on different sides. So the intention is a general awareness so that we can continue forward hand in hand.

GS: All, all to follow the same path which is to liberate our country.

MM: Good. And is it your intention to stay here?

GS:  Well, we have already been here a month. Within that, we have been rotating people, because there are others who have been going to the doctors, because of the state of their health. They’ve have already done 50 days, but during that time there have been other people coming to support. It has been a great achievement in itself – the people can see because this is a well transited place. The Central Square is the heart of Honduras. So, people have been able to see that this little plot continues to be maintained and that this will not cease until it achieves what the people want. That is, finish with the corruption and truly live in dignity for all. The 8 million Hondurans.

MM: Yes, yes, that is it. Many many thanks. And, eh, and can you let me have your name again.

MM: Excuse me, Gerson Suazo. So, perfect, many thanks.

GS: So, this is what we have been doing here, and we have managed to make many people come together, people who have never been involved, including those who came and gave their experience. By chance a man approached me and he said that that he had never been interested in politics, he had never been interested in taking to the streets, and none of that. But he saw a part of the messages we have on our signs, which drew his attention, and now he is involved, he comes more frequently, and he has never participated in anything before, in politics, not in any group from the left, in absolutely nothing – he has been nothing more than a citizen who hasn’t cared about the situation of others. And now, seeing this type of action, carried out by a group of people who also want the same, who are demonstrating their discontent with what is happening in our society. So, he was able to take that example and now he is incorporating himself, just like others who have involved themselves.. Right now, we are hoping that more young people will come from other sectors, to add themselves to the strike, the camp of the Indignados. So we are here to make a big noise – the intention is that that big noise of the people of Honduras may always be maintained..

MM: And say hello to James.

GS: Yes, James, a very good friend. Greetings to James – the last time that we were talking – he is a very good person. And so greetings, greetings for James.

GS: Yes, it was very good because he had the opportunity ……

GS: He had the opportunity to live with us and through what is happening in this country.

MM: Yes. So, perfect. Many, many thanks.