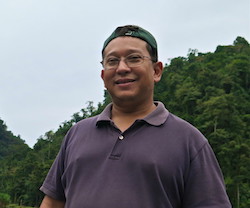 Notes: the ACD is the Association for Conservation and Development and ENCA is the Environmental Network for Central America.

Martin Mowforth (MM): Recording on the 14th of September in Panama City with Osvaldo Jordan of the ACD. Just a short explanation by Osvaldo of the situation at the moment and over the last few months of the Ngabe Indians and their struggle against a range of development projects, particularly Barro Blanco.  Osvaldo, many thanks.

Osvaldo Jordan (OJ): Thank you. Yes Barro Blanco is the latest in a series of complaints between the government of Panama and the Ngabe people that began rising about eight years ago with the construction of the Changuinola dam or the Chan 75, and there were many human rights violations and abuses and manipulations during that project. There are several legal actions which are still pending, but there were several reasons that some of the Ngabe thought that Chan 75 was a weaker defence; one was that they did not have any land tied down or dedicated and the other is that some of the other people had accepted it in a very desperate way – they had accepted reparations and they thought, you know, they had weakened the common front. However, we get into Barro Blanco and the land is perfectly demarcated, nobody has accepted any reparations, and still after years and years of dialogue, the government closes the gates you know, and they see a plot of land – I would say technically not the government, but a company and then the government doesn’t have any regulations to stop the company from doing it. So basically that demonstrates that it’s not about having land demarcated; it’s not about the people not being decisive to defend their territory; it’s about greed; it’s about the desire of investors to seize land that is viable and to turn what is a sacred land or what is their home and their lives, and turning that into money. Because basically the land surrounding Barro Blanco flooded again on May 22nd and stopped from about June 9th until August 19th .

OJ: Yes, this year, on August 19th the flooding was resumed and now that a lot of the territory has been flooded, it demonstrates that it doesn’t have any value, not to the government, not to the investors; you know those lands were simply flooded. Not even rescue happened to biological artefacts or flora and fauna; no it was just a case of closing the gates and letting the waters rise.

MM: Let’s see, the forest cover which existed, was that cut down beforehand?

OJ: No they didn’t, they just left it.

MM: So that’s suggests then, that all of that vegetation under the water is going to release all of its carbon over the next twenty to thirty years?

OJ: That’s a case where Barro Blanco is a CDM certified project. We fought together with the appropriate committees through a process of validation but they still proceeded. Basically they launched the first consultation online in 2008 in English and we managed to send comments and then they sent a second consultation in 2009 and we couldn’t get the comments on and then we asked the executive board for the CDM not to approve the validation, but they completed all that paperwork by 2011, And then when the conflict escalated, and if you read that first submission from November 2008, you can see what happens later. It said see that the project doesn’t have the support of the local communities. There is a history of mobilisation and clashes over the project and the project is going to harm the environment on which the communities live. That’s all there. But they still approved all the CDM registration by 2011. As far as we know they have not been able to attain CER’s [Certified Emissions Reduction certificates] because they are not on the reparation yet so that cannot begin with. We really would consider re- ?[inaudible, 5:34] if this kind of certificates are issued, since we have been writing again together with solidarity organisations in Europe and the US. We will be writing again to the executive board of the CDM. The only way out they gave us, in a very legalistic way, is that the Government of Panama retrieves the letter of approval. The Government of Panama, this new Government in 2014, well they stopped the project for some periods and they issued a fine, and we said OK if you issued a fine, that  demonstrates that there is non-compliance, please be consistent and take away the LOA [Letter of Approval]. Well there is currently a campaign – you can see it online – because the Government of Panama is trying to portray itself as a global leader with carbon mitigations and fighting climate change, so we really want them to demonstrate with this what they are saying.

OJ: Yes, one thing we are clear, this is not solely to do with Barro Blanco and this is not only about the Ngabe. It’s the global prowling of the indigenous peoples living under pressure in terms of natural resources, which they also call their homelands. If they didn’t think the way they did and that they cheered and thought that was part of their lives and they sold everything, a lot of investors would be happy. However, that’s not the way they think, and since they are not going to give it up voluntarily, that’s where the use of the violence of development happens with the use of force. So we are deeply concerned about what has happened at Barro Blanco. We’ve been talking to some of the leaders and the consensus is that they are going to continue fighting, because they realised that if they don’t continue fighting this is going to repeat itself in different parts of the territory with different people, so that’s the consensus and that’s the reason the Barro Blanco mobilisations have not only happened in the area that is regularly impacted, but in other areas, and that’s the reason why I wish you could actually visit over there, but the whole region is militarised. They are policed really, but police with military training sadly all over the roads and it’s very shocking for the community. They feel invaded by all these people there, with shields and tear gas and they will not allow them to protest, so that’s the reason I told you some of the leaders are here in Panama City because they want to bring some visibility to the situation.

MM: OK. Many thanks Osvaldo, thanks for your company and your words, and I’ll try and get some of your words into the next ENCA newsletter or the ENCA website, and onto the website for The Violence of Development. We look forward to more cooperation between ENCA and ACD in the future.