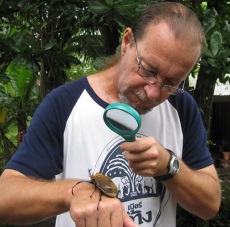 Martin Mowforth (MM): Having explained what we’re all about now, the particular problems we wanted to ask you about were first of all the possible over-regulation that is practiced by the National Park authorities, particularly in respect of guides, but maybe in other activities in and around the National Park here.

Karis McLaughlin (KM): the objections that people may make – the people that live here.

Ross Ballard (RB): Ok, the feeling locally amongst the guides is that (1:04) the administrator of the National Park has been the administrator for too long. And they have enough instinct to know – this certainly happens in other places – that when an administrator of a National Park has been around too long he has a tendency to treat the Park as if it were his own private garden. And this seems to be what is happening here. There used to be trails inside the National Park when we would do canoe tours that were ideal because on a three hour tour not everyone can sit comfortably for three hours in the bottom of a canoe. So this gave them the chance to stretch a little bit, to walk around a little bit, and it gave them a different aspect of the Park and to get into the forest a little. That has all been closed now. The only trail that is open is the one behind the National Park office. There are two trails back there. They’ve allowed the worst of the two to remain open. We can’t even go into the other one. It’s interesting if you go into there with someone who really knows what they’re talking about. It can be made interesting. But it’s very close to the beach, the salt air has affected what plants can grow there. A shortage of plants means a shortage of habitats for animals, and a person doesn’t see all that much – some of the glitzier things, monkeys, but that’s about it.

RB: they’re concerned about the condition of the trail. So, they’re closing it. They’re going to work on it. But it’s been closed now for over a year – the better trail behind the National Park – and that’s a good trail. A guide can do 3 hours in there quite easily – not as good aforest as the one we were in this morning. There seems to be very little sensitivity. The park is very high-handed with the guides. There seems to be very little sensitivity. These people are paid by the national government, and if nobody came through the Park, they would still draw their salary. (3:29)  For guides, it’s different; and for people visiting this area it’s different. There’s very little for them to do. It’s not damaging to a trail to have people going through it. They have made some good regulations such as people having to wear rubber boots – the idea being that people won’t walk round puddles – which they do anyway – but they walk through them instead, rather than widening the trails and destroying the habitat. So there have been some good regulations, but to be closing off trails that have been in the same condition that they’re in at this moment after it’s been closed for a year – there’s no sense to it.

MM: What about the new trail that they’re building up the Cerro?

RB: I don’t know what it’s going to finish looking like, but we’ve seen the beginning of it down at the base, and, as we were saying, it’s wide enough to take a small car. There’s no need for that at all. The old trail is very much like the trail on which we conducted our tour – small, single file, which is how people travel on trails in any case, with a great deal more charm than a straight line slash through the forest.

MM: Well, the second comment we’d like to get from you is your explanation this morning about the settlers who represent something of a problem, not just to this area but also to many others, but particularly in this area, not so much to the National Park but to the buffer zones around the Park – that is the problem of settlers coming in and establishing themselves so that they manage eventually to get some title. And you were talking about some of them who make a business of it. Can you tell us a bit about that as well?

RB: Allright. (5:32) Firstly, I don’t think that’s what most of these people are doing. Most of these people are rural Nicaraguans. They have come here to make a better life for themselves. Mostly they are responsible citizens who are working for the lodges and other businesses, but mostly for the lodges here.  What was population zero about 14 years ago is now about 440 people. They have their own school; they’re well established in the area; frequently as rural people they cook  with wood. The wood has to come from somewhere. It comes from the Hill, which is officially protected, although, as you noticed this morning, it’s very, very rare to see anyone out there. They cook with wood. They build with wood. And they eat meat. And their attitude is that anything that they don’t have to buy from the shop they take from the forest – that includes all of the things I’ve just mentioned – wood to burn, wood to build and meat. (6:39)  there are hunting blinds on the side of the hill where we didn’t go, but I go sometimes on my own – hunting blinds which are built, fresh, so that they can spend an evening there and shoot whatever comes by. Wildlife has gone way, way down on the hill as a result of this. The National Park, in its wisdom, has closed it, but has done nothing to preserve it; and in this case, it is the most unique area here. It is the only hill for many, many miles around, and there are things living there which don’t live elsewhere. This is mostly to do with plants, although I collected insects as well; and we found insects there of which there were no records in Costa Rica or were not supposed to be found in this part of Costa Rica – that sort of thing. A new species of tarantula was found there – it was endemic to the hill and nowhere else.

MM: What about those who were making a business out of it – out of settling, clearing and then selling?

RB: (7:53) Costa Rica has very strong homesteading rights, and people – a minority of the squatters, put it that way – are coming in and using it as a source of income. They pay nothing for the land. If they can hold it for a stipulated period of time – and I’m sorry but I don’t remember the number – but it’s not a long time, and they pay nothing for it, for something that is a gravy train for them. Having got title to the land, they will sell it and then move onto another area and do the same. It’s sort of a family business.

KM: Do you think that’s the fault of the law then?

RB: Oh, yes. (8:52)  I think that probably most countries in the world need to reform their homesteading law. There are some ridiculous, archaic laws which don’t function well in today’s ….