The spectacularly corrupt and violent situation in Honduras is US and Canadian policy at work, and the situation just got worse

The close links between the Government of Honduras and organised crime continue to feature significantly in The Violence of Development website. One remarkable fact about these links is that as the evidence mounts of their existence, the US and Canadian governments continue to support the Honduran President Juan Orlando Hernández as “an ally in the war on drugs”. Despite his strong denials of links with drug trafficking and organised crime, the evidence piles up against Hernández.

We are grateful to Rights Action and Karen Spring of Honduras Solidarity Network for permission to reproduce the following articles on this website. 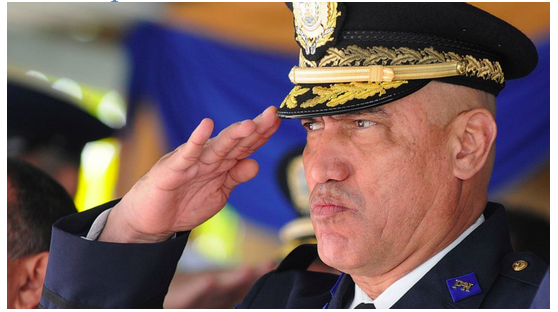 According to the press statement announcing the indictment, “Juan Carlos Bonilla Valladares allegedly abused his official position to protect cocaine shipments and murder a rival drug trafficker as part of a conspiracy involving high-ranking Honduran politicians and members of the Honduran National Police.”

The indictment makes direct reference to President Juan Orlando Hernández’s involvement in drug trafficking. It outlines how Bonilla Valladares worked in coordination and on behalf of Tony Hernández, the brother of current President Juan Orlando Hernández (JOH), and President JOH himself: “BONILLA VALLADARES corruptly exploited these official positions to facilitate cocaine trafficking, and used violence, including murder, to protect the particular cell of politically connected drug traffickers he aligned with, including [Juan Antonio “Tony”] Hernández Alvarado and at least one of Hernández Alvarado’s brothers, who is a former Honduran congressman and the current president of Honduras referred to in the Complaint charging BONILLA VALLADARES as “CC-4.”

Tip of Impunity Iceberg
For years, Bonilla has been the subject of controversy and faced public accusations of extrajudicial killings, torture, ties to drug cartels and organised criminal groups operating inside the National police, and corruption. His indictment for drug trafficking in the US is only the tip of the iceberg.

Previous accusations against Bonilla show how he and the Honduran police are deeply involved in organised crime; how mechanisms to stop violations of the Honduran police do not function as they should; how impunity has reigned for years; and how investigations against those intertwined with the powerful and large-scale drug traffickers in Honduras, never ever advance.

Death-Squad Killings of Young People
In 2013, the Centre for Economic Policy and Research (CEPR) published an overview of news articles from the Associated Press, Insight Crime, US Government documents published by Wikileaks that describe Bonilla’s shady past.

All sources describe a 2002 investigation conducted by the former Chief of the Internal Affairs of the Honduran Police, María Luisa Borjas against Bonilla and other police officers, involved in “at least three killings or forced disappearances between 1998 and 2002.” Bonilla was accused of killing Honduran youth. In 2002, Bonilla was charged with murder but was either found not guilty two years later or prosecutor’s dropped the case before it went to trial.

Murdering Rival Drug Traffickers
One of the murders of a drug rival that Bonilla is allegedly tied to, was also discussed in Tony Hernández’s trial in New York in October 2019. The rival mentioned is Franklin Arita Mata, who was killed in July 2011 in an ambush of his bulletproof vehicle transporting the principal victim and three of his bodyguards.

The Honduran press reported on the 2011 incident writing that Mata’s car was attacked by unknown individuals travelling in two vehicles. Furthermore, in response to the murder, Bonilla, as the Regional Police Chief responsible for the jurisdiction where the incident took place, told the press that various police teams would be sent to investigate.

Involvement In a Police-led Organised Criminal Death Squad
In 2014, Honduran journalist David Romero read a testimony on Radio Globo of an unidentified police agent that had worked alongside Bonilla. The police agent turned whistleblower outlined several crimes including torture, rape, and death squad killings involving Bonilla and several members of the Honduran police. The testimonies gave a lot of detail about specific murders committed by police-led organised criminal death squads that Bonilla was involved in.

In one of the many cases that the testimony outlined, was the rape of a young woman in the northern city of Choloma. In order to force the young woman’s mother to help the police death squad locate ‘Amilcar El Renco’, the woman was kidnapped, taken to an unmarked ‘security’ house, and raped.

The agent’s testimony identifies the police agents involved in the incident, including  ‘El Tigre’ Bonilla, Egberto Arias Aguilar (former Police Commissioner, current location and position unknown), Eduardo Antonio Turcios Andrade (named in 2019 as head of the newly created Transportation Security Force (FUSET)), and Victor López Flores (former Police Commissioner who pleaded guilty in US courts for drug trafficking in 2017). The agent also stated that the police-led organised criminal death squad had support from the Federal Bureau of Criminal Investigation (DNIC) and an Analysis section of the National Police.

Honduran media would later report that Cristian Amilcar Sierra, also known as ‘El Renco’, who the police death squads were looking for in 2014, would be murdered in his home in Choloma in 2015 for allegedly being involved in the criminal activities of the gang ‘El banda de el Negro’. ‘El Negro’ is likely Carlos Arnoldo ‘El Negro’ Lobo who was extradited to the US, worked with the Los Cachiros and the Sinaloa drug cartel, and was later convicted in the US for large-scale drug trafficking.

Former police chief of Honduras accused of trafficking drugs to US on behalf of Honduran president
By Jeff Ernst, 30 April 2020
https://www.theguardian.com/world/2020/apr/30/former-police-chief-of-honduras-accused-of-trafficking-drugs-to-us

US federal prosecutors have accused the former national police chief of Honduras of trafficking tonnes of cocaine to the US on behalf of the country’s president, Juan Orlando Hernández, and his brother, who was convicted of similar charges in October.

Hernández was named as an unindicted co-conspirator in the trial of his brother Juan Antonio ‘Tony’ Hernández, but the US has continued to call him an ally in its ‘war on drugs’.

According to the complaint filed on Thursday by the Southern District of New York, the former police chief Juan Carlos Bonilla “participated in extreme violence, including the murder of a rival trafficker, to further the conspiracy.”

Prosecutors also allege that Bonilla was entrusted with “special assignments, including murder” by President Hernández – who is identified as a co-conspirator – and his brother, Tony.

Bonilla, an imposing figure known as El Tigre (the Tiger), was appointed as national police chief in May 2012 at a time when Honduras had one of the highest homicide rates in the world. In the role, Bonilla collaborated with US counter-narcotics forces operating in Honduras and helped to create a special unit of the police that works with the US Drug Enforcement Administration (DEA), leading to the indictment of numerous high-profile drug traffickers including the president’s brother.

Bonilla, who was also identified as an alleged co-conspirator of Tony Hernández last year, has repeatedly cited his relationship with the DEA as evidence of his innocence.

The US pushed for his removal from the police job in 2013 owing to persistent allegations of violence, including that Bonilla had participated in death squads targeting suspected gang members.

Bonilla was previously the regional police chief of the Copán department on the border with Guatemala, one of the most crucial points on the drug trafficking route. During that time, prosecutors allege, he orchestrated the murder of a rival drug trafficker who was threatening a route controlled by Tony Hernández and an associate.

Bonilla has denied all allegations, telling a local news station on Thursday: “I am not a villain. I am a former officer of the national police with the rank of general who served my country and served society.”

It is unclear if the US has formally requested Bonilla’s extradition. If so, the president would be faced with a dilemma of whether to order the capture of a person who could some day testify against him in court. Experts believe Bonilla is likely to follow the example of others who have been indicted on drug trafficking charges and turn himself in to the DEA.

US prosecutors allege that President Hernández received millions in bribes from drug traffickers including Joaquin ‘El Chapo’ Guzmán, the notorious former leader of Mexico’s Sinaloa cartel. The president has vigorously denied all allegations of ties to drug traffickers, referring to them as “fairytales”.
*** / ***