If you are wondering, dear reader, why I didn’t post on last week’s assassinations, including beheadings, it was because I simply could not handle it. It’s no excuse, the campesinos in Aguán aren’t backing off. But sometimes even the secondhand trauma is too much. It’s one of those dilemmas of violence research- one’s own pain is voluntary, in a sense, and thus cannot be legitimately compared to the pain of those who are experiencing the evident, immediate trauma (except within a theoretical framework of a violence continuum, using a million caveats). But perhaps my twisted gut, this sense of nausea and impotence can provide some small insight, even thousands of miles away, into the terror embodied by those facing the barrels of Facussé’s assassins’ guns.

In any case, when he’s not busy ordering the murders of campesinos who get in the way of the WWF-eco-certified African Palms he has on the lands he stole from them, Facussé, who has admitted on national television that his guards kill peasants (and yet has never been investigated by the government for his role in these murders) is now fighting back. Tired of people calling him out, he took out a full-page ad in La Tribuna to publicly denounce/threaten the human rights defenders who have affected the only thing he cares about- his profits. What’s really astounding—and not just speaks, but shouts to the level of US-backed impunity in Honduras—is that, in order to personalize this threat against his opponents, he not only names them, but quotes exactly what they have to say about him, just as unapologetically as he admitted to doing exactly what many of them accuse him of- murdering campesinos. The ad, included below as an image, reads as follows:

The most recent campaign is aimed at blocking the certification of the company by the UN for the sale of carbon credits for the development and implementation of clean energy projects and projects for environmental conservation; to stop international financial institutions from financing our companies, thus putting at risk the investment so desperately needed by the country and finally to promote the boycott of our products.

We ask you all to not be fooled by these people and groups that denounce us internationally irresponsibly and with sinister intent, not only with the aim of destroying the hard work of thousands of Hondurans and Central Americans in making the Dinant Group what it is today, but also of undermining the environment for investment and development in Honduras.

We call upon the corresponding Honduran authorities to investigate what we have stated here.

To the Honduran nation and international community, we reiterate here our commitment to continue helping the development of the country, through business practices committed to the conservation of the environment and through proper corporate social responsibility.

“To affect [his/its] business, profits and image is an important tactic, and we will do whatever we can to ensure that these projects do not continue receiving funding”,
said to Sirel the representative of FIAN Honduras, Ana María Pineda

As such, the decision to launch a boycott campaign against the products of the Dinant Corporation means joining together the desire of thousands of Hondurans who want to deal a blow to the economic and political power of Miguel Facussé, one of the leading exponents of this structure”
Lorena Zelaya, member of the FNRP

Miguel Facussé is “an assassin and thief straight out of Hell” who will “make himself owner of the entire country using the same methods he uses here”:
Father Fausto Milla, in relation to Zacate Grande

“The soldiers and police are commanded by Miguel Facussé, despite the fact that they are paid by the Honduran people, but they obey the orders of the de facto powers that have taken control of the nation”.
Bertha Oliva, COFADEH

“Save the Rainforest makes an urgent call to send a message to the British government to withdraw authorization from these two projects that will directly benefit Miguel Facussé Barjum, repeatedly indicated by campesinos organizations to be the primary individual responsible for the violence and violation of human rights in the Bajo Aguán”.
Save the Rainforest, German NGO in relation to the projects of carbon credit sales

“the loans that are being provided to this man [Facussé], who has become the number one criminal in Latin America, for now, with the ability of mobilizing an army that at this moment, openly patrols the streets of the Aguán, in Tocoa and in Trujillo, carrying out acts of terror in the numerous cooperatives in the palm agrarian sector in the Aguán”.
Andrés Pavon, CODEH

What I have seen is outrageous and Facussé is a criminal”
Mirna Perla, Salvadoran judge and member of the parallel True Commission set up by the FNRP

We have confirmed the lack of seriousness of the Attorney General and a generalized dissatisfaction in the region, which could lead to a dangerous increase in conflict. Furthermore—explained the leadership of FIAN International—, international standards are not being applied with regards to evictions. They are premeditated violent acts, without legal backing, and represent crystal-clear violations of human rights”,
Central American coordinator of FIAN International, Martin Wopold Bosien. 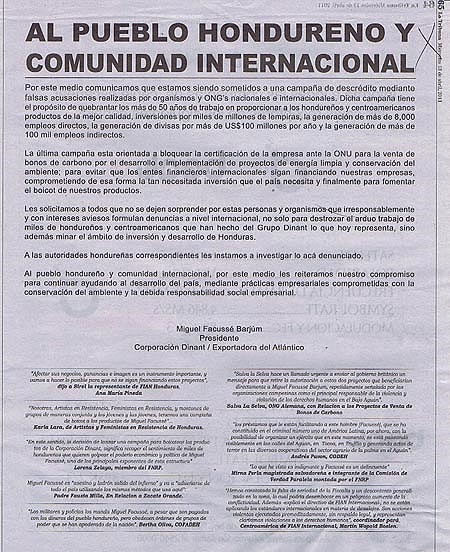