I am grateful to Sandra Cuffe and to the progressive organisation Toward Freedom for permission to reproduce this article here. Although the article refers to environmental defenders in many parts of the world, it is also relevant to Central America where the abuses and threats suffered by environmental defenders are as bad as or worse than those suffered elsewhere in the world.

It could be your morning coffee, your bananas, your sugar, or the palm oil found in approximately half of all packaged products at your grocery store, including breakfast cereals. Land and environmental defenders were killed in record numbers last year, and for the first time, agribusiness is tied to more killings than any other sector, according to a report published Tuesday by Global Witness, a London-based NGO (https://www.globalwitness.org/en/campaigns/environmental-activists/at-what-cost/).

The organisation documented 207 killings of land and environmental defenders in 22 countries around the world in 2017, a slight increase from 2016. However, the number of people killed while protesting large-scale agriculture in 2017 more than doubled.

“For the first time, agribusiness surpassed mining as the most dangerous sector to oppose, as 46 defenders who protested against palm oil, coffee, tropical fruit and sugar cane plantations, as well as cattle ranching, were murdered in 2017,” noted the authors of ‘At What Cost?’, the Global Witness report.

Last year also saw a rise in massacres, many of which were linked to agribusiness conflicts. Global Witness documented seven cases in which more than four land and environmental defenders were killed. In Brazil, three massacres had a combined death toll of 25, more than 40 percent of the total 57 defenders killed last year – the most killings Global Witness has ever recorded in any country.

In the Philippines, killings of activists and community leaders skyrocketed. “President Duterte’s aggressively anti-human-rights stance and a renewed military presence in resource-rich regions are fuelling the violence. Almost half of the [48] killings in the Philippines were linked to struggles against agribusiness,” according to the report.

On the southern island of Mindanao, an indigenous village leader engaged in a heated struggle against the expansion of a coffee plantation, and four of his relatives, and two other residents were all killed by soldiers on December 3. The government claimed the deaths were the outcome of fighting between the army and leftist guerrilla forces, but there was little evidence to support the claim. Between the government’s announcement that it would earmark more lands for industrial plantations and the increased militarization of Mindanao, killings of locals opposing land grabs are unlikely to cease.

Global Witness identified several root causes underlying threats to defenders, regardless of whether cases are tied to agribusiness, mining, logging, or other activities. Corruption and impunity are on the list, but so is the failure to recognise customary or collective land rights and secure land tenure. Failure to seek the free, prior and informed consent of affected communities also underpins the violence, according to the organisation.

“Local activists are being murdered as governments and businesses value quick profit over human life. Many of the products emerging from this bloodshed are on the shelves of our supermarkets,” said Ben Leather, a Senior Campaigner at Global Witness.

A United Nations intergovernmental working group continued to work on its draft of a binding international instrument concerning transnational corporations, but at the moment, most international guidelines concerning business and human rights are just that: guidelines. They’re voluntary. Products are sometimes labelled ‘sustainable’ by industry-led groups regardless of the facts on the ground.

Sugar and palm oil linked to violence and killings can be ingredients in all kinds of everyday products. Amnesty International traced palm oil from Indonesian plantations with reported human rights abuses to nine multinational food and household corporations with dozens of brands.

“We invite consumers to join us in campaigning alongside defenders, taking their fight to the corridors of power and the boardrooms of corporations. We will make sure their voices are heard,” said Leather.

Whether they are linked to conflicts over agribusiness or extractive industries, killings are at the extreme end of the spectrum of violence and harassment against land and environmental defenders. 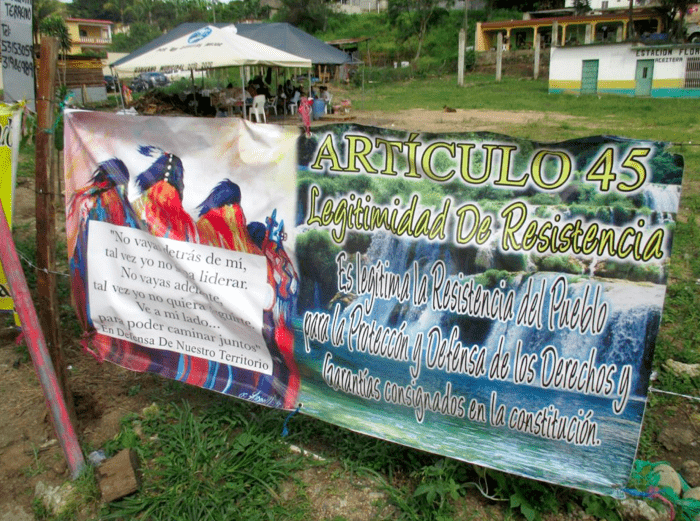 A banner highlighting the legitimacy of resistance hangs along the road in Casillas, Guatemala, where a regional resistance movement has shut down traffic to Tahoe Resources’ Escobal mine for more than a year. (Photo: Sandra Cuffe)

Criminalization, death threats, sexual assault, and intimidation are everyday occurrences in many parts of the world.

Franklin Almendares is all too familiar with targeted intimidation. The head of the National Centre for Rural Workers (CNTC), he had been meeting with representatives from other Honduran land rights organisations this past February to discuss land struggles and the ongoing political crisis in the country, and there was much to talk about.

It was after midnight by the time he left the meeting. There was almost no traffic in Tegucigalpa at that time of night, but Almendares did not make it more than three blocks from the meeting when a vehicle suddenly crashed into his. Due to past attacks against him, Almendares opted to keep driving, but the other vehicle maneuvered around to the front of his, blocking his path. Two of the four men got out, pulled Almendares from his vehicle, frisked him for a weapon, and searched his bag.

“The only thing they robbed was my agenda,” Almendares told Toward Freedom. It was not the first time this had happened to him. “I’ve had my agenda stolen four times,” he said.

A police patrol truck had suddenly appeared a few minutes after the incident and officers tried to convince Almendares to get in and accompany them to search for the perpetrators. He declined, and the police officers did not bother to take notes, ask for details, or even inspect vehicle damage before leaving.

Almendares decided to go to the police station downtown to file a formal report, but he was intercepted along the way by a different police patrol truck, this time with both police and military personnel aboard. They knew who he was and what had happened. Fearing for his safety, Almendares declined their offer to accompany him and quickly took off for home, making sure he wasn’t followed. Regional CNTC leaders also face frequent intimidation, threats, and attacks.

“At CNTC we’re in a permanent state of crisis,” said Almendares. “Lands are being handed over for monoculture crops, dams and mining.”

Thousands of campesinos have been criminalized, and both public security forces and paramilitary groups have been attacking communities defending their lands, he said. Between the increasing concentration of power since the 2009 coup d’état and the fiercely contested re-election of President Juan Orlando Hernández last November, Almendares expects things to get even worse, and he is not alone.

The new Global Witness report addressed Honduras in its review of trends in 2017. The group documented four killings of land and environmental defenders in the country, a sharp drop from the 14 in 2016. However, Honduras still had the second most killings per capita in 2017, after seven consecutive years with the notorious distinction of holding the lead. Despite a drop in killings, repression of human rights defenders in general increased, as did attacks, the report authors noted.

In neighbouring Guatemala, killings have shot up drastically this year. To date in 2018, at least a dozen land and environmental defenders have been killed, and most of them were indigenous. According to the Human Rights Defenders Protection Unit of Guatemala (UDEFEGUA), the first eleven killings this year included five Campesino Development Committee (CODECA) members, three members of the Campesino Committee of the Highlands (CCDA), a Maya Chorti community leader, a Quetzaltenango social pastoral land group affiliate, and a member of the Coordination of Communities Affected by Sugar Cane Agribusiness.

“In 2018, it’s possible to predict a greater risk, not just due to the political and social context but also because the cost of attacking a defender has greatly dropped due to the inaction, tolerance, complicity and behaviour of the state, opening the door for state and non-state actors to consider that impunity will be guaranteed if they act against [defenders],” UDEFEGUA noted in a report published earlier this year.

This month, on July 12, another Guatemalan defender was killed. Ángel Estuardo Quevedo, a community leader from Casillas, Santa Rosa, was shot several times in broad daylight. He was an active participant in the powerful regional resistance movement to Tahoe Resources’ Escobal mine, and was involved in coordinating the rotation of residents participating in protest actions.

Locals from several municipalities in the area have been working together for more than a year to maintain an ongoing roadside protest in Casillas to block mine traffic and stop mine production. The movement also maintains a round-the-clock presence outside the Constitutional Court in Guatemala City pending a ruling concerning the mine.

For years, community leaders, activists and residents organised in opposition to the Escobal mine have been killed, attacked, jailed, and threatened. Miguel Ángel Payeras is one of the countless Casillas residents who experienced repression last year, when police attempted to violently evict the roadside protest camp in order to escort fuel to the mining project.

“They came with the intention of fighting with us,” Payeras told Toward Freedom in an interview last year. “They shot tear gas at people running away.”

A diabetic with vision and leg issues, Payeras uses a wheelchair and was unable to flee. Police dragged him away in his chair, and the foot in which he has no feeling was dragged along underneath the footrest, hitting his ankle over and over. Despite the repression, people regrouped and others poured in from nearby communities and other municipalities to maintain the protest camp and the selective roadblock to prevent mining operations. The resistance has continued every single day since.

If the first half of this year is any indication, the next annual Global Witness report could very well reveal that Guatemala took over as the country with the most per capita killings of land and environmental defenders in 2018. Despite the life-and-death stakes, defenders are not backing down.

“We’ll be here until the mine is shut down,” said Payeras. “If they kill me, I’ll die in the struggle.”

Sandra Cuffe is a freelance journalist based in Honduras. You can find her on twitter at @Sandra_Cuffe or read more of her work on her website at sandracuffe.com

Toward Freedom (https://towardfreedom.org/) is an organisation that has been offering a progressive perspective on world affairs since 1952.