We are grateful to the Honduras Solidarity Network for permission to reproduce the following summary of developments in Honduras since the military coup in 2009 that brought an end to democracy in the country. 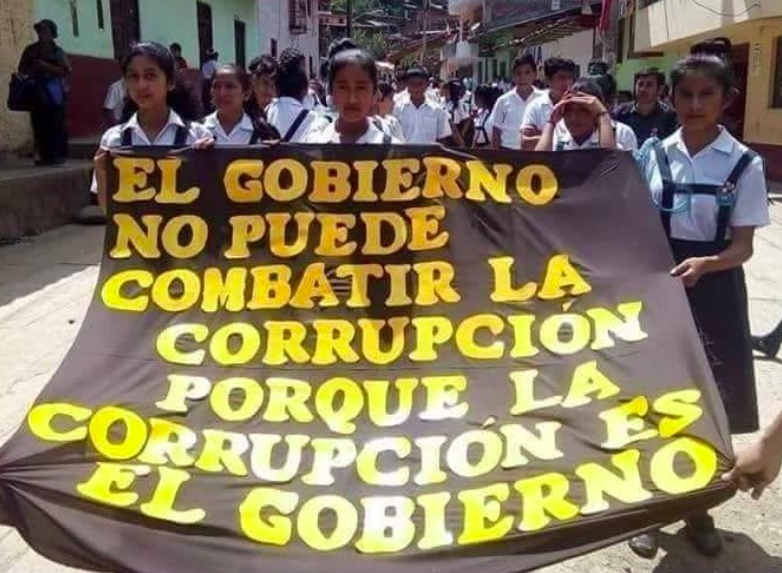 “The government can’t combat corruption because corruption is the government”
11 years, and counting, of repressive, corrupt, ‘open-for-global-business’ regimes in Honduras, backed and legitimized fully by the US, Canada and the ‘international community’.

Eleven years ago today (June 28), Honduras was turned upside down by a military/political coup against President Manuel Zelaya Rosales.

The coup pushed aside many reforms that had been made or begun by President Zelaya in consultation with Honduran social movements such as an increase in minimum wage, land reform, gender equality, increased rights for indigenous communities and efforts to reduce the costs of living for the poor. The goal of the coup was also to crush the hopes for a deeper change in Honduras and the refoundation of the country through constitutional change and a popular constituent assembly.

The response of the people and their organisations from the Garífuna Caribbean coast, to the Lenca people’s mountains, from campesino communities across the country, to urban youth, trade unions, women’s and LGBTI organisations was to take to the streets in massive numbers starting the day of the coup, June 28, 2009.

Over the last 11 years, Hondurans have returned to the streets over and over again, despite massive migrations, electoral frauds, assassinations, disappearances, repression, and now, in the 11th year of the coup, a narco-dictatorship during a pandemic.

Since the coup, some things have been constant from the dictatorship: militarization, criminalization of activists, neoliberal privatizations and the growth of an extraction economy. All this with US-trained police, military police and military on the streets, violently abusing Hondurans for everything from protesting to being on the street without a face mask.

There are still 11 political prisoners held in pretrial detention and hundreds who still face serious charges from the 2017 electoral fraud protests in 2017 and 2018.

Impunity for the powerful and political elite continues with no justice and virtually no investigations of the hundreds of assassinations/disappearances from 2009 to 2020.

The highest profile assassination since the coup, that of indigenous leader Berta Cáceres, still has not seen the prosecution of the intellectual authors or financiers of her murder; her organisation (COPINH) and COPINH’s communities continue to be threatened and harassed.

In 2019-2020 at least 11 Garífuna activists were assassinated in impunity.

Journalists are threatened and physically attacked and members of the political opposition are continually harassed and threatened.

The military has been given control of significant monies for the agricultural sector while campesinos are killed, arrested and evicted, also in impunity.

In 2020, the criminal nature of Juan Orlando Hernández (JOH)’s dictatorship is now more exposed than ever with high profile prosecutions in New York of his brother and their drug trafficking business associates.

But, despite the blatant and documented violations of human rights, of corruption, and of drug trafficking, the US government continues its public, economic and military support for Hernández. The Canadian government refuses to speak or publicly denounce the abuses committed by JOH.

Meanwhile, JOH has taken advantage of the COVID19 epidemic to further militarize the country, giving the army more power and restricting protests, and destroying the livelihood of the poor (more than 60% of the population) while restricting the small amounts of relief funds to those who support his political party.

Still, resistance continues and the people continue to organise. Over the years, new coalitions and movements have formed and joined the resistance in a fight against dictatorship. This fight continues in the streets, the countryside and in the electoral realm.

The Honduras Solidarity Network has been standing with the Honduran people’s resistance since 2009. We continue to fight for the US government and the Canadian government to stop supporting dictatorship and any use of our tax dollars for violence in Honduras. One tool in that fight in the US is our continued support for the Berta Cáceres Human Rights in Honduras Act in the House of Representatives.

Our member organisations continue to demand an end to impunity in Honduras and justice for Berta Cáceres and for all those assassinated and disappeared or imprisoned and persecuted by the dictatorship. We accompany the struggles against mining, megaprojects and for land rights and all the demands of the Honduran people and their organisations that fight for a new, transformed, and ‘refounded’ Honduras. ”

For more historical and recent information on Honduran resistance and solidarity see the HSN website and its links to member organisation sites and other information.