In December 2019 we included in this section of The Violence of Development website a Honduras Solidarity Network article about Honduran political prisoner Edwin Espinal. Here we are pleased to include, almost two years later, the news that the charges against Edwin and co-defendant Raúl Álvarez have been dropped. Rights Action gives a brief account below along with links elsewhere for more details. 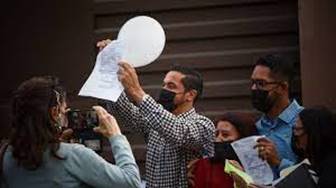 Edwin Espinal, left, and co-accused Raul Alvarez, outside a Honduran courthouse, Sept.17, just after all the politically motivated charges (related to their democracy and human rights activism in Honduras) were dropped. Photo: Karen Spring.

More details of the case and the struggle for justice are found in the CBC news report (21 September 2021 – link given here:

Edwin and Raúl have to wait a bit longer for the ruling to be formally published, and the appeal period to expire. It was, however, a clear and fast ruling from the court. It is widely suspected the ruling will be legally ratified, and the decision will not be appealed by the corrupt, military-backed Honduran regime.

THANK-YOU to all Rights Action supporters who helped us support this very difficult struggle that began with Edwin’s illegal detention on January 18, 2018.

Also refer to the December 2019 article in this section of The Violence of Development website.